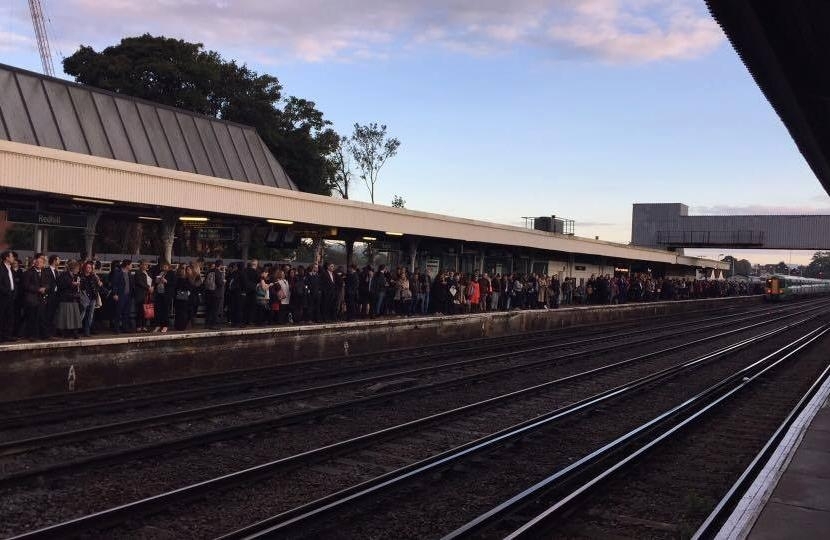 Below is a copy of Crispin's speech to the Reigate and Redhill District Rail Users Association (RRDRUA) AGM on 28th March which provides an overview of what the RRDRUA and Crispin have been doing to support local rail users.

Crispin's previous update on this matter, which includes the most recent exchange of letters with the Department for Transport, can be found here: https://www.blunt4reigate.com/news/redhill-fares-hump-update

The past year has been yet another one of disruption and disappointment for local rail users, many of whom have written to me with their own personal stories of transport, professional, and domestic hardships caused unreliable rail services.

Whilst it may not appear that RRDRUA, or indeed myself, have made any tangible difference to the hardships that have landed upon us as a result of the 2018 GTR timetable changes and its bodged implementation, the seemingly intractable issue of the Redhill Fares Hump, and the ongoing issue of unreliability and cancellations besetting our services, this is not the case.

Without the ongoing and dedicated work of the RRDRUA committee, believe it or not, things could be a lot worse. RRDRUA has challenged GTR with every single timetable change that has negatively affected our local services and has demanded explanations for delays and cancellations, especially those caused by skip-stopping when late running trains are diverted onto the Quarry line, and all stops on the Redhill loop are abandoned. The group is in regular consultation with both the GTR timetable design team and the complaints team, as well as Network Rail and Great Western Railway (GWR). As a result of this, some improvements have been achieved, or worse outcomes avoided, and RRDUA’s voice is being heard in the right places, even if its requests cannot always be accommodated satisfactorily.

I think it is important to remember, hard though it is when your train has just been cancelled, that our local railway problems need to be put into context. The busy Brighton line has for many decades suffered under investment on both infrastructure (such as tracks, points, signals and stations) and rolling stock. It is only recently that long term changes such as the upgrade of London Bridge, the proposed re-engineering of East Croydon and Windmill Bridge Junction, the upgrade of Gatwick Airport Station, a number of engineering maintenance projects along the line, and the introduction of new generation roiling stock have been prioritised. Such changes, invariably lead to disruption and in the case of new rolling stock a bizarrely worse traveller experience, but it is a real challenge to the railway industry to maintain services whilst all this is going on. At a time of unprecedented demand for rail services, there is therefore a balance to be met between the need to maintain short term service quality and reliability, and the need to upgrade a creaking system to make it fit for the future.

In this context, the important question to consider is:  given the challenges just referred to, are our local services being unfairly singled out for poor treatment, or is the Redhill line suffering the same as everywhere else? My answer to this question is that, locally, we are suffering more than our fair share, and it is this anomaly that we need to address.

Redhill line stations have been the subject of more cancellations and delays in the following two years than other local and regional stations, have suffered more timetable cuts, and their fares are still affected by comparative overpricing – the phenomena known as the Redhill Hump. RRDRUA continues to work tirelessly on behalf of local rail users to draw these inequities to the attention of the rail authorities. Whilst I am not an apologist for GTR per se, some of the changes that we need are simply not within its powers to implement due to the current franchise structure, railway infrastructure restrictions, and the financial environment. A good example of this is that GTR and Network Rail fully support the building of a third platform at Reigate station to enable 12-car Thameslink trains to terminate there. This would greatly enhance direct London Bridge capacity, service frequency, and journey times.  However, Network Rail does not have the financial resources either to draw up detailed technical plans or to implement such a project. Lack of central funding in the face of other rail infrastructure priorities is currently preventing this relatively inexpensive, yet hugely impactful, infrastructure project from taking place.

I am, however, very supportive of the recent proposals that RRDRUA has made for a cheaper solution to some of our timetabling and service problems using existing infrastructure on the North Downs line. This is especially important in view of the time and money that we know are required for rail infrastructure improvement projects. This proposal would improve London services from Reigate, and provide resumed direct services to Brighton and between Tonbridge and Gatwick, transferring some services from GWR to Southern and using bi-mode trains capable of operating under diesel or electric power.

Please be assured that RRDRUA and GTR will continue to work together to try to obtain improvements to those timetable and reliability issues that can be changed. Unfortunately, this will not mean that we can reach the service level and timetable options that we deserve in the short term. However, I understand that there will be some improvements in GTR’s 2019 timetable for local services, especially at weekends, and this is most welcome.

We are also mindful of the potential impact that proposed increases in GWR services to and from Gatwick Airport may have on the level-crossing down time on the A217 at Reigate and are looking at possible signalling solutions that may reduce the downtime for each rail crossing.

Turning to the fares issue, it would be true to say that, after promises made to me in the House of Commons last October, I am very disappointed at the minor tweaks that the Department for Transport, upon instruction to GTR, made to some fares in January 2019 to start addressing the Redhill Hump anomaly. The former rail minister Jo Johnson had previously promised me that the removal of the Redhill Hump would be completed by 2021, with fare adjustments taking place each year until then.

The adjustments made in January 2019 did not apply to the most used ticket types. This was particularly disappointing for Thameslink service rail users who had already suffered a 17% increase in fares due to the splitting of Southern and Thameslink fares in 2018.

I have since made representations to and met with the current Rail Minister, Andrew Jones MP, specifically to discuss this matter. Whilst I welcome DfT’s current consultation paper on Pay as You Go fares, as a means of simplifying the regional fares structure in the future, it is unlikely that implementation of this will take place until after 2021, and it should therefore not be used as an excuse for not addressing the Redhill Hump beforehand. Following my recent meeting with the Minister, I am still awaiting a statement from him explaining exactly what the DfT’s plans are to eliminate the Redhill Hump between now and 2021. I will, naturally share this, as soon as I receive it.

Once again, whilst addressing our short term issues, we also need to look at the long term issue of reform of the current complex and opaque fares structure affecting local rail users. Whilst I welcome a Pay as You Go solution which ensures that ticket buyers obtain the cheapest fare on the route they buy a ticket for, I am also in favour of a move towards a zonal system rather than a point-to-point fares system, much like that operated by Transport for London, and will continue to press for this in my correspondence with Ministers.

I would like to close by thanking the members and dedicated Committee of RRDRUA for all their voluntary work on behalf of our local rail users. This is one of the most effective rail users’ associations in the region and we are all lucky to have it. If you are not already a member, I would urge you to join. The more voices we have behind our efforts to effect local improvements, the better.