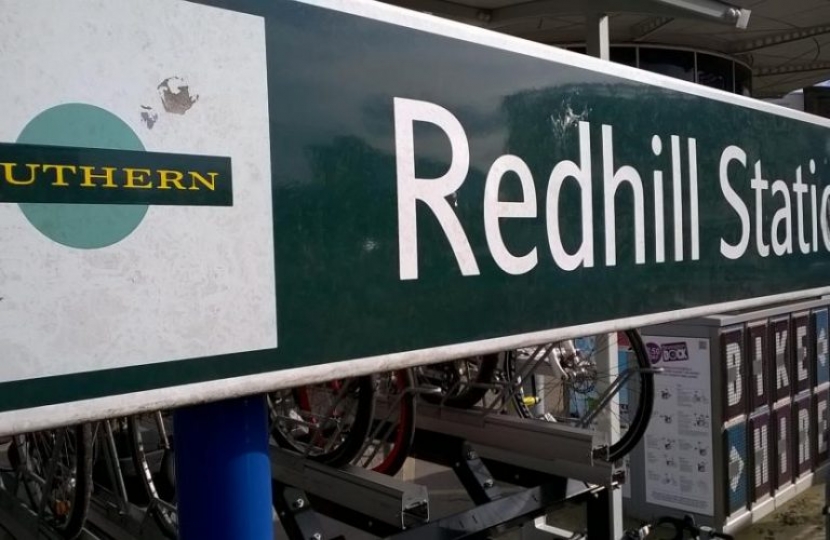 It has once again been quite a year and, as ever, I am hugely impressed by the way that RRDRUA has taken on a range of key issues on behalf of local rail users and pressed relentlessly for improvements. These include a long, and at times, frustrating consultation process with GTR on its new timetable, the ongoing fair-fares campaign (of which more later) and regular interaction with Network Rail about local rail infrastructure and maintenance issues. Additionally, the Association has dealt with a plethora of individual grievances from station car-parking and broken ticket machines to delay-repay queries and unannounced cancellations.

I can confidently say that RRDRUA is one of the most effective and influential rail users associations in the country, and the rail traveling public should be rightly indebted to the hard work of its Committee and especially its influential and tireless Chair, Stephen Trigg.

Ever since becoming the MP for Reigate 20 years ago, I have been convinced that the quality of our railway service is absolutely vital to the local economy, not only by enabling us to remain a key location for London commuters to live, but also to enable local companies to base themselves here and employ staff who can travel in to work by train.

In my opinion, the importance of Reigate and Redhill in terms of passenger numbers and journey frequencies has been, and continues to be, underestimated by the Department for Transport, GTR, and Network Rail, and this is the reason why I am so frustrated that at times we seem to be seen as a secondary route in terms of service provision and fares, largely because our local lines do not fall on the Brighton mainline itself, but on a parallel loop. It is a disgrace, for example, that there are no longer any direct fast services to and from Redhill to Brighton, considering the local economic implications of this.

Despite this, I remain optimistic that, whilst there have been a number of setbacks and false starts during the year, there are some green shoots emerging that will enable us to look forward to improvements in service level, reliability and the fares structure in the future.

Last year The Department for Transport confirmed £300m additional funding for improvement works, to be delivered by Network Rail, to boost the resilience of the infrastructure on the Southern and Thameslink railway networks. This was set aside specifically to improve reliability for passengers along the Brighton Main Line (which. Incidentally, includes the Redhill line) and associated routes, fund the replacement of old tracks, points and signalling and deal with structural repairs in tunnels. These improvement works complement the £1 billion five year upgrade programme at London Bridge station.

The BMU programme has recently overseen the completion of the new platform at Redhill Station (Platform 0).  There are also plans, currently being developed, to build a third platform at Reigate Station (Platform 3). This project will enable 12-car Thameslink trains to terminate at Reigate, facilitating the timetabling of regular fast services from Reigate to London Bridge via Redhill and East Croydon, currently impossible to schedule due to the absence of an extended platform.

Plans are also being considered to upgrade the points system at Earlswood to enable trains exiting Redhill southwards to join the fast Brighton line. It is because of an existing outdated crossover that we no longer have any direct fast trains from Redhill to Brighton and that southbound trains have to use the slow stopping line.

This stuff can be fixed with some energy and focus, but infrastructure projects take time to plan and deliver. Given the current ownership structure, they remain vulnerable to other demands on the public sector budget. However, for the first time in many years, the outlook is positive for significant improvements to local rail infrastructure that will increase the frequency and reliability of rail services from Reigate and Redhill to London termini and Brighton in the years to come.

During the past year, on behalf of RRDRUA, I have made a number of representation to Ministers at the Department for Transport, pressing the case for improvements to Reigate and Redhill Services, and protesting about the anomalously high fares local rail users have to endure due to the ‘Redhill Hump.’ I believe that, at last, our voice is being heard in Westminster. In December, my meeting with the then Rail Minister, Paul Maynard, resulted in a commitment to review the Redhill Hump, and freeze the annual inflationary increase on some season ticket fares for 2018. In March this year, along with Steve Trigg, I met with the new Rail Minister, Jo Johnson, and elicited from him a promise to examine the Redhill Fares Hump and to come back to me with proposals to mitigate it by the summer. My suggestion to him is to include Reigate and Redhill in the TfL zoning area to ensure fair and transparent fares for all local rail users. It remains to be seen what proposals he will come up with, but I am assured that serious efforts are now underway at the DfT to address our local inflated and opaque fares structure.

In terms of the GTR 2018 Timetable, as stated, RRDRUA has done all it possibly can to press for improvements, including sending a petition to GTR and the Department for Transport, signed by over 2,000 local rail users. At present, the new timetable is extremely disappointing, in terms of peak service frequency and London journey times. However, changes can still be made to improve this after May 2018, though some of these will only be possible with track and station infrastructure improvements. The proposed third platform at Reigate, the planned major improvement works at East Croydon and Windmill Bridge Junction as well as Gatwick station, and improved points and signals South of Redhill, will all enable faster and more frequent services for local rail users in the future.

The past few years have been particularly difficult for local rail users, especially commuters, many of whom have written to me with their own personal stories of transport, domestic and professional hardship caused by industrial action and unreliable rail services.

There are now some signs of improvement, but there is still a long way to go, and rail users may require even more patience even where this has already worn thin. However, it is important that we are on the right track, if you will excuse the pun, and working steadily towards a plan of improvement.

I would like to close by once again thanking the dedicated Committee of RRDRUA for all its voluntary work on behalf of our local rail users.