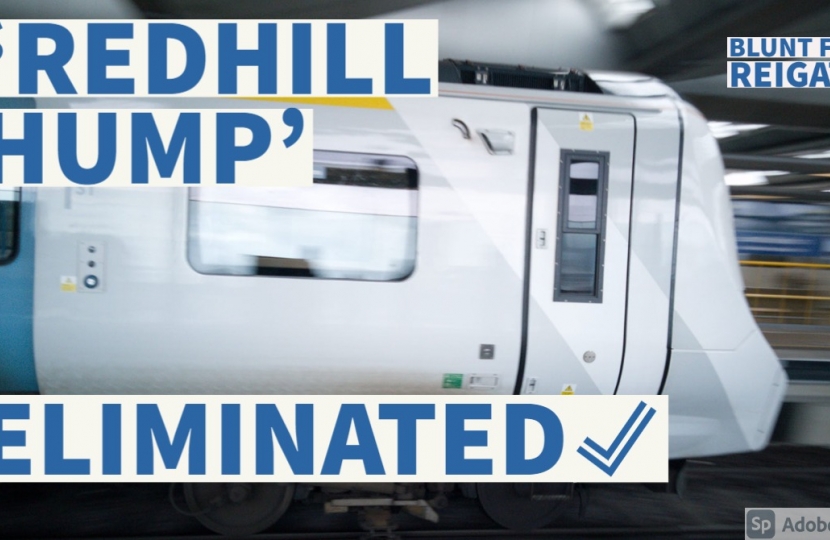 I warmly welcomed news from the Department for Transport that, after six years of lobbying by myself and the Reigate and Redhill District Rail Users Association (RRDRUA), the unfairly inflated rail fares charged to passengers purchasing tickets at Redhill and surrounding stations, commonly known as ‘The Redhill Hump” is finally to be eliminated.

As of the 1st March 2021, the unique fare anomaly whereby certain tickets from Gatwick Airport to London are at a lower cost than equivalent tickets from Redhill and surrounding stations will have been removed. Key smartcard and paper ticket prices will change on the 1st March 2021, with Transport for London pay-as-you-go fares adjusting to match in May 2021.

This completes the delivery of the commitment Jo Johnson MP, the former Rail Minister, made to me and my constituents in Parliament in October 2018.

GTR, with the agreement of the Department, has frozen or reduced anomalous fares from Reigate, Redhill, Earlswood, Salfords, and Horley. On certain fares such as the weekly travelcard from Salfords to London, this will mean a reduction in price of more than £10 per week compared to today.

From the 1st March 2021, regulated fares across the network will rise by 2.6%, the lowest actual increase in four years. This increase reflects the unprecedented taxpayer support that is being provided to the rail industry, whilst also ensuring rail remains an attractive mode of transport to passengers.

However, given the unique situation at Reigate, Redhill, Earlswood, Salfords and Horley, the Department for Transport has agreed to the introduction of fare freezes and reductions on anomalous fares from these locations, so that rail users do not pay more than customers travelling from further away from London.

I am absolutely delighted that we have eventually reached the position whereby rail users buying tickets from local stations have a fair deal compared to other stations. I have been fighting to remove this fares anomaly for a long time and this issue constituted one of my manifesto priorities in the 2015 general election. It has been a long struggle to convince the Department for Transport of the inequitable nature of the local fares system and the fact that local rail users should not be made to pay for a historic pricing structure that could be remedied. Whilst it is a shame we could not have achieved this sooner, I am assured that the public promise I was made by the Rail Minister in 2018 to remove the Redhill Hump by the end of Govia Thameslink Railway (GTR)’s current franchise period in 2021 has been delivered.