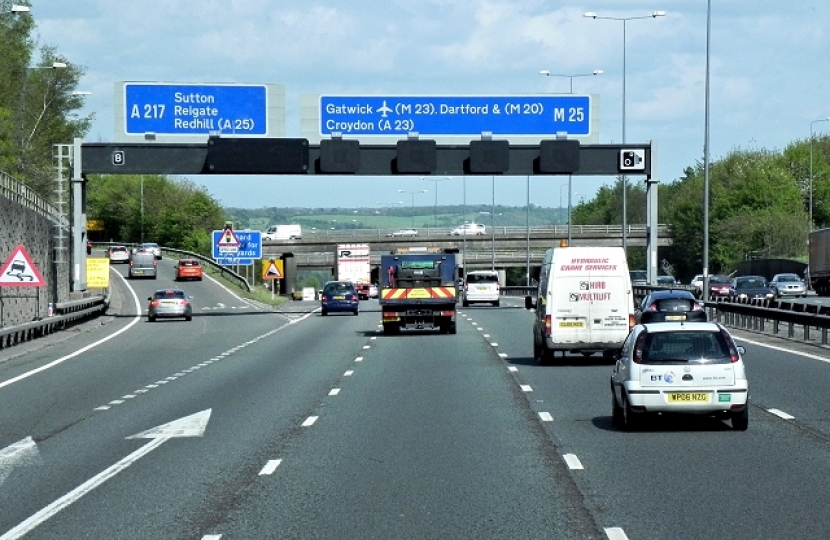 I have received a large number of communications from local residents about the proposed improvement works at Junction 8 of the M25 at Reigate Hill, sponsored by Highways England, and scheduled to start in January 2020. This improvement scheme has raised a number of concerns from residents, and local businesses, largely due to the disruption such extended roadworks are likely to cause to local traffic.

In response to these concerns, I recently wrote to the CEO of Highways England requesting a meeting of key interested parties to discuss the project in more detail.

As a result of this meeting, I am persuaded that this disruptive road project is not simply a case of making improvements for the sake of it.  There are some serious maintenance and repairs that are essential and urgent on the J8 roundabout, including replacement of a waterproof membrane, twenty-year-old traffic signals that are in danger of failing completely as well as their technology being hopelessly out of date.  There is also an urgent need to replace and increase the capacity of ducting for utilities that cross the M25 under the bridge, and bridge joints need replacing.

It is going to be a difficult period for motorists as the works are expected to last nearly a year. This will include traffic lanes and occasional closure of the bridge. However, after the work is done, we are expecting over ten years without any need to maintain or upgrade this section of road. The scheme is necessary and efforts will continue to minimize the inevitable inconvenience and congestion.

Here are some key facts concerning the project:

Benefits for local and Surrey residents include a safer junction, better traffic management, new road surfacing, and signage –all of which we would have otherwise had to be paid for from local taxation rather than central government funding.

I am satisfied that Highways England and Surrey Highways have considered local concerns, and in some cases changed their plans to accommodate them, or provided more information which negates them.

In summary, the case for the Project is strong and can only grow. Despite all our reservations, we agreed that the least harmful ways of working are being used, and it is clear there are some benefits for Surrey and local residents.

I will be keeping a close eye on developments and let residents know of any updates I receive in the meantime.

The project will not address the key issue for Reigate traffic which is the congestion on Reigate Hill and the level-crossing in Reigate that is expected to see an increase in barrier downtime in May 2020 when GTR introduces another service per hour. This is a separate problem that needs to be looked at urgently.