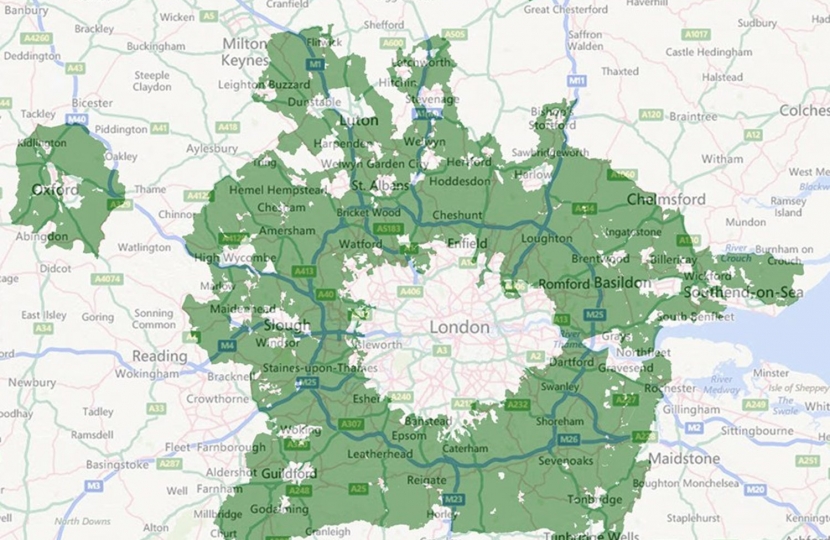 It is, therefore, a crucial section of the Green Belt that surrounds London and prevents urban sprawl from London to Brighton. Its dilution would have long-term implications for the entire concept of a green belt around London and the benefits that this brings to society locally.

We are currently living through a period when the LMGB is under more threat than it has been since its inception, due to the imperative to build new homes and failures in the planning system which put unreasonable pressures on local authorities to provide new homes whilst developers have ‘land banked’ sites for development in anticipation of rising property prices as they restrict supply. The number of Green Belt sites around London under threat from development has more than doubled over the past year, according to the analysis produced by the London Green Belt Council.

In response to this serious threat to our local environment, in partnership with the London Green Belt Council (LGBC) and the Campaign for the Protection of Rural England (CPRE), I have recently set up a London Green Belt All Party Parliamentary Group (APPG). The Group will develop policy thinking to influence the debate on housing and planning policy, with the objective of protecting the capital’s Green Belt and achieving sustainable development.

This is not because I do not agree that the properly planned building of new homes is necessary to fulfil the needs of a growing population, but because pushing local authorities to permanently encroach upon the Green Belt does not allow for the sustainable development of the type and density of affordable homes we need. In the Green Belt land is more expensive and it is much more lucrative for developers to build expensive four or five bedroom detached houses in large ‘garden village’ type developments than to explore options for smaller scale ‘brown-field’ or ‘infill’ developments containing a mixture of contained affordable and high-end housing that do not despoil green spaces.

I strongly believe that we urgently need to review our approach to housing policy across the region and the new APPG will inform the debate and develop recommendations for Green Belt-friendly planning policy.

It is also important for the APPG to raise the protection of the Green Belt as a planning priority, a position from which it has fallen in recent years, despite policy statements paying lip-service to its continued importance. The reality is that a complete re-think of planning policy and the property development market is required, driven by local need, and local circumstances, with protection of the Green Belt, and the benefits it provides to residents in and around London, at its heart.