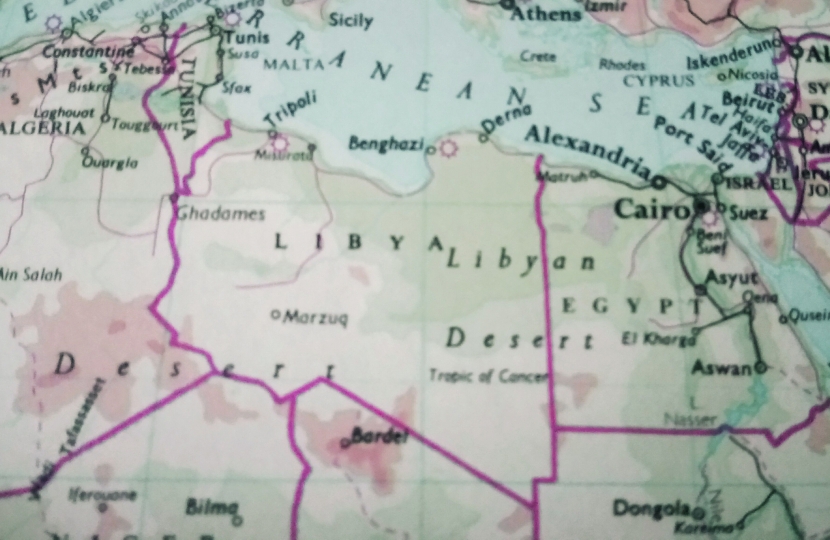 Terrorists are thriving in Libya's lawless spaces. The country's chaos is our problem now.

The threat posed by ungoverned space has once again become all too real. Details about the Manchester attacker, his recent visit to Libya, and his possible associates are still emerging and we should not speculate too far beyond what we actually know. But it seems highly unlikely that his trip to Libya was purely coincidental.

We do know, however, that even more British citizens were massacred on a beach in Sousse, Tunisia by a terrorist trained in Libya than died on Monday night. The lesson is that violent extremist groups will rush to fill the vacuum of ungoverned space, from which they will seek to harm both our interests and our children in whichever ways they can.

For most Libyans, 2011 was supposed to be the year of their emancipation from Gaddafi’s dictatorship. However, their story since the revolution has been one of painful battles with their fellow citizens, while confronting Gaddafi’s enduring legacies, competing external national interests, and violent extremists. The military hostilities of 2011 were not the end of one bitter story, but the beginning of a protracted conflict that descended into a multi-front civil war.

The hopes of the immediate post-revolutionary phase were not inevitably doomed to be disappointed. However, the failure to incorporate the many armed groups that emerged to depose Gaddafi into state security forces led to the militiafication of the country. In this security vacuum, all other problems became increasingly unmanageable and the early window of opportunity to create a democratic culture or an institutional base capable of managing the political, regional, and tribal divisions of Libyan society was missed.

It is a matter of contention whether this was a Libyan failure or one of the international community.  What we do know is that it is now a problem for all of us.

By 2014, parallel administrations had emerged, fighting for the right to govern Libya, while neglecting its governance. In what was previously a rentier state with massive oil reserves, economic and humanitarian crises have now brought despair to many.

In the vast expanse of the Libyan desert, gangs seized the chance to smuggle desperate people in unspeakable conditions from sub-Saharan Africa to Europe. It is in this unadministered territory too that local authorities and western intelligence agencies struggle to identify, let alone control, extremists who seek the space to advance their medieval nihilism and to transfer expert and deadly knowledge to those seeking to harm us.

The Manchester attacker’s links to Libya will undoubtedly re-open elements of the debate about how to manage the country. There are no simple answers to solving the problems of Libya or ungoverned space more generally. However the challenge becomes infinitely more difficult if the nations of the international community put their own interests ahead of the collective imperative of getting this territory back under some form of civilised administrative order, accountable to the international community, for the long term.

All of our interests in Libya are so much more difficult to protect and advance without a stable and effective central government, and this can only be sustainable through a political settlement that includes the country's principal competing interests.  We should not underestimate the cultural challenge of getting people who have emerged from dictatorship to appreciate that compromise means both sides win, not that someone has lost.

As someone who has been prepared to be critical of many aspects of the UK’s role in Libya, as detailed in our Foreign Affairs Select Committee Report last year, I believe that the Government’s recent engagement deserves credit, not least the efforts of our fantastic ambassador Peter Millett.

Despite dark and pessimistic moments warranting despair, the Government has remained doggedly committed to delivering an inclusive political process to bring about a sustainable political resolution for all the people of Libya.

Only three weeks ago the Foreign Secretary was devoting time to support a possible diplomatic breakthrough and he has sought to advance dialogue between the main competing forces.

As we struggle to come to terms with this week’s horrific attack against innocents, the calls may increase for the Government to attempt short cuts by backing an individual strong man in the pursuit of a quick fix to bring stability to Libya. However, “picking a winner”would only bring more division and destruction, drive more young people towards radicalisation and start the whole sorry cycle of dictatorship, revolution and collapse all over again, even if the reinvigorated civil war actually concluded in "our" dictator winning out.

Our resolve to support an inclusive political process should be reaffirmed, not questioned, and we should have no role in sowing the seeds for a return of military dictatorship to Libya.

But we are not limited to diplomatic measures. As formally unacknowledged, but widely reported, UK special forces have directly assisted in combating the so-called Islamic State, notably in the Battle of Sirte. We must continue to be prepared to take military action against the most radical groups who directly threaten our citizens, while recognising that Libyans deserve governance that can accommodate the principal interests in their society and deliver the stability we and they want and need.

Crispin Blunt was chair of the House of Commons Foreign Affairs Select Committee, whose report into UK involvement in Libya was released last year.

This article was published in the Daily Telegraph on 25 May 2017.
http://www.telegraph.co.uk/news/2017/05/24/terrorists-thriving-libyas-lawless-spaces-countrys-chaos-problem/