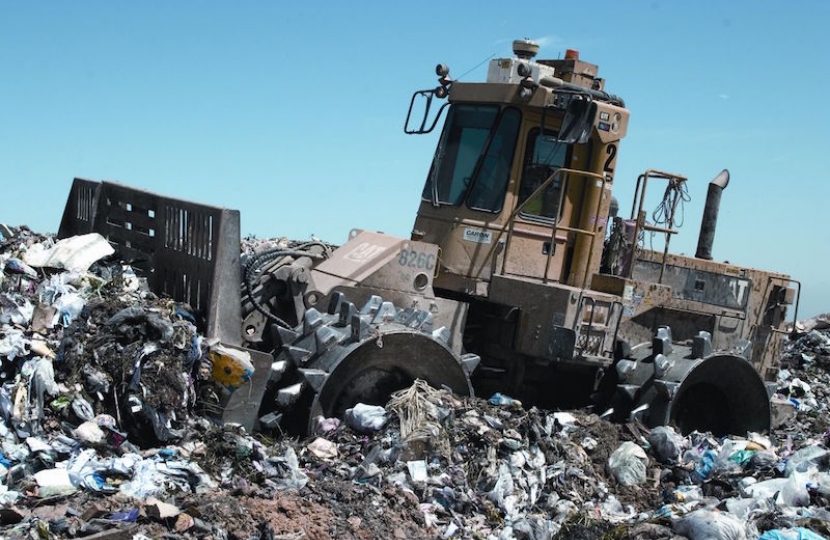 At the briefing it was explained Biffa will have capped the final trouble spot on the site – so-called "Cell 6" - by end of next week.

The work will mark the conclusion of extensive operations which has seen 60,000 square meters of land area capped, the installation of extra gas extraction infrastructure, and the processing of additional leachate, at a cost of at least £1.3 million to Biffa over the last 6 months.

The company has also doubled the number of people working at the site since the beginning year.

Operating procedures have also been changed meaning that Biffa only fill much smaller areas, building waste up higher, using vertical wells which should be more resilient and give better control of the odour.

Commenting after the visit, Crispin said "It is essential that people continue to report apparent smells from the site promptly. I am sure that some local residents will by now feel a sense of futility at picking up the phone, but residents should call the Environment Agency's hotline 0800 80 70 60 as soon as they believe that they have smelt something coming from the site. This enables both Biffa and the Environment Agency to verify the reports and act on them – retrospective or incidental complaints cannot be properly investigated.

I recognise that those affected in Redhill have put up with this blight for far longer than is acceptable. However, having seen the works for myself today, I hope the community can be confident of a marked improvement very soon, though I am acutely conscious that we have been here before. If, after normal working is established after 23rd July, unacceptable odours continue, I hope local residents can provide the data that will enable me to take up the intolerable nuisance properly with Biffa and the Environment Agency.

I remain anxious that local groups and organisations continue to compete for Biffa Award grants. The Biffa site in Redhill takes in 1-2% of UK's waste which is why the community deserves the lion's share of the available cash. I encourage any Redhill-based community buildings, recreational or cultural facilities which are seeking funding to look into whether they are eligible for a Biffa Award grant here: www.biffa-award.org/get-involved."