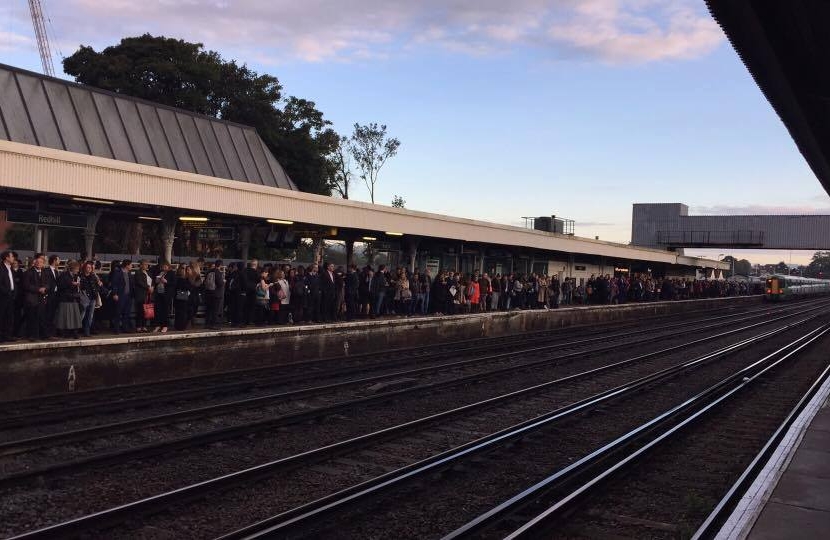 Despite repeated personal approaches to The Secretary of State for Transport, Govia Thameslink Railway and Network Rail, Crispin Blunt has expressed ‘acute exasperation’ at the ongoing failure to provide an acceptable rail service to passengers travelling between London and Redhill despite it being weeks since the bodged implementation of the new GTR Timetable.

During the meeting it was revealed that a new interim timetable is planned for mid-July. This interim timetable will aim to have the majority of services from the original May timetable being restored, especially peak ones which carry around 85% of daily users.

Crispin commented: “Whilst I am fully aware of the difficulties that GTR has faced as a result of the implementation of its new timetable, I am appalled at the operator’s failure to address ongoing and severe service gaps and cancellations on local services, despite ongoing protests from myself and the Reigate and Redhill District Rail Users Association (RRDRUA). Commuters, especially those using London Bridge services are at the end of their tether.

Whist I welcome the news of a new interim timetable by mid-July, even with this, and eventually the full May timetable being restored, Redhill will still see a worse service than before the timetable changes and, crucially, this does not help distressed commuters having to travel every day over the next fortnight.

These ongoing service failings are causing so much misery and hardship for my constituents and once again, it seems, the Redhill service is being side-lined despite the large numbers of passengers using it. This is completely unacceptable”

Stuart Cheshire said: “We are very sorry about the current situation and the impact it is having on everyone’s life. What happened in May was that the timetable introduction failed due to industry-wide delays in the approval process. As a result, there was not enough time left to optimise the timetable and we are now putting all our train planning resources into doing just that.

I fully recognise the impact on the service provision at Redhill and Reigate, and where we can we will prioritise services there. We are working to add trains in whenever we can to reduce gaps in the service, and passengers should check each day to see which services are available.

We are encouraging passengers to claim for compensation under the Delay Repay Scheme where the threshold is set at 15 minutes delay based on the original May timetable, or the timetable on the day. There is also Enhanced Compensation for delays of 30 minutes or more on 12 days in a four-week reporting period.”