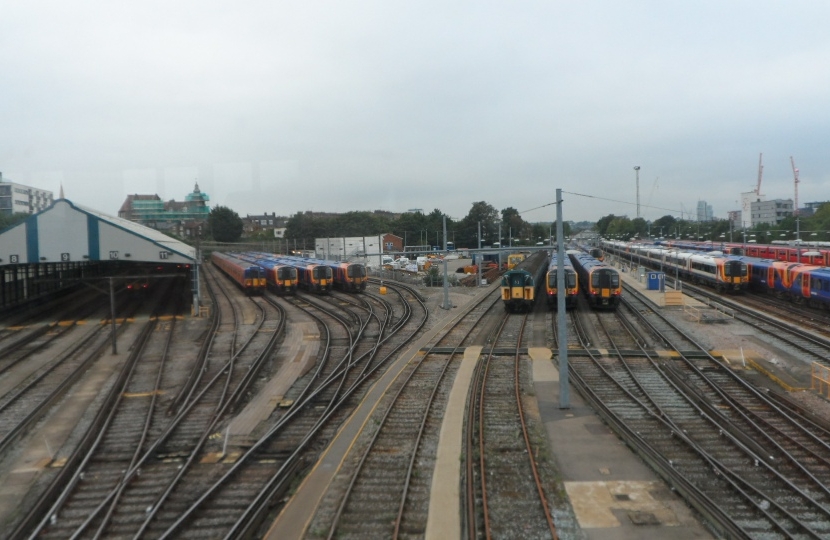 Whilst there are many factors affecting reliability, frequency, and journey-times on our local railway system, including unsatisfactory performance by the rail operator, industrial action, unreliable rolling-stock, and inadequate timetabling of services, by far the most important factor is track and station infrastructure. It is impossible to deliver a fast and reliable service if the signals, tracks, points, junctions, crossovers and station infrastructure are dated and unreliable.

After decades of under-investment in the London to Brighton Line, which is essentially a Victorian construction, it is little wonder that, as passenger and train numbers have grown significantly - with private sector operators driving a massive increase in service levels from British Rail days - the underlying infrastructure has become more and more unreliable. The rail infrastructure, now securely back in the public sector through Network Rail, has become even more dated, causing delays and cancellations to services. Weakness in the infrastructure has placed severe limitations on the types and frequency of services that can be timetabled, and since 2014 this has been brutally laid bare. The public sector is, however, finally responding and we can take some reassurance that, over the past two years, money is being set aside to improve this important area of rail transport infrastructure.

Last year The Department for Transport confirmed £300m additional funding for improvement works, to be delivered by Network Rail, to boost the resilience of the infrastructure on the Southern and Thameslink railway networks. This was set aside specifically to improve reliability for passengers along the Brighton Main Line and associated routes, fund the replacement of old tracks, points and signaling and deal with structural repairs in tunnels. These improvement works will complement the recently completed £1 billion five year upgrade programme at London Bridge station.

Furthermore, Network Rail is now working on an additional Brighton Mainline Upgrade (BMU) Programme which is planning longer-term solutions to improve the Brighton line. By far the most important project in the BMU programme is the planned upgrade of East Croydon Station and the rail infrastructure to the north of it, known as Windmill Bridge Junction, which is a major bottleneck point causing regular delays to services in and out of the station. The plan is to add two more platforms to East Croydon station with dedicated direct lines and platforms for trains going to and from London Bridge separated from those going to and from Victoria.

Closer to home, the BMU programme has recently overseen the completion of a new platform at Redhill Station (Platform 0).  This has been operational since 2 January 2018 and early signs are that it has improved traffic flow and reduced delays at Redhill. There are also plans, currently being developed, to build a third platform at Reigate Station (Platform 3). This project will not only require the building of the new platform, but also the installation of an additional power supply and new signaling. This is necessary to enable 12-car Thameslink trains to terminate at Reigate, facilitating the timetabling of regular fast services from Reigate to London Bridge via Redhill and East Croydon,   currently impossible to schedule due to the absence of an extended platform.

Plans are also being considered to upgrade the points system at Earlswood to enable trains exiting Redhill southwards to join the fast Brighton line. It is because of an existing outdated crossover that we no longer have any direct fast trains from Redhill to Brighton and that southbound trains have to use the slow stopping line.

Infrastructure projects take time to plan and deliver. Given the current ownership structure, they remain vulnerable to other demands on the public sector budget. However, for the first time in many years, the outlook is brighter for significant improvements to local rail infrastructure that will increase the frequency and reliability of rail services from Reigate and Redhill to London termini and Brighton in the years to come.

I believe that had British Rail been privatised as a vertically integrated business to reflect competition with road and air, rather than create artificial competition between train operating companies, it would have responded much faster to the market demand placed on it. However, even the public sector gets there eventually and we are finally seeing some improvement.