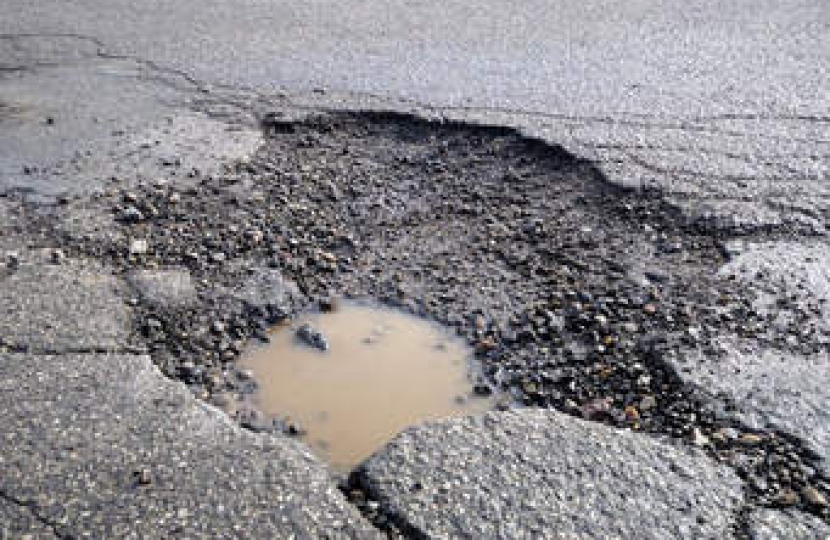 At this time of year in particular, as a result of winter weather, many of us become acutely aware of potholes in our local roads. These can cause damage to vehicles and present particular danger to cyclists and motorcyclists. Surrey is particularly badly affected because of the volume of traffic using its roads compared to other parts of the country. Apparently, this winter we have also had the misfortune to experience “the wrong kind of weather” for road surfaces, with a unique combination of snow, ice, and rain, which has exacerbated the problem.

Central Government is aware of the damaging effects of poor road surfaces and has introduced a £250 million Pothole Action Fund. £75 million of this fund had already been provided to councils in the year ending March 2018.  In December last year, the Government also announced an additional £46 million of funding for potholes for the year ending March 2018. This £46m funding will enable the repair of almost a million potholes by local highway authorities in England, outside of London.

Furthermore, this March, a further allocation of £100 million was made to councils to help repair potholes and other storm damage. This includes £75 million from a Flood Resilience Fund. This funding will help repair nearly 2 million potholes and ensure roads are protected from severe weather.

So how do these funding initiatives help us in Surrey? We have secured a modest £500,000 from the Government's latest round of pothole funding, on top of the £1.4 million already announced (making a total of around £1.9 million) on top of Surrey County Council's own highway budget. In addition to this, Surrey County Council (SCC) has borrowed an additional £5 million for winter road repairs, creating a total pot of around £6.9 million to address the problem. In addition, a recent survey has been carried out on the conditions of the Surrey roads, that has resulted in Surrey borrowing a further £15m making a staggering investment in our roads of £21.9M.

Also, each local County Councillor has a fund of £7000 to spend locally on road and footpath issues through the Local Committee.

On 7th April, SCC commenced a special programme of winter damage repairs across the whole county, the worst roads are being prioritized so they will be tackled first, focussing on Category C and D roads, that is residential roads. The objective is to urgently repair and fully resurface key roads identified and prioritized by Local Committees around the County and implemented by local highways gangs. This work is expected to be completed by summer 2018.

Additionally, SCC has committed to repairing potholes on a 28-day timeline from the time they are reported.  Temporary repairs are made in the most urgent cases. These often result in jobs that may appear to road users as "rushed" or "incompetently executed”, but they are only meant to be temporary repairs. Temporary repairs are done for reasons of safety and allow crews to quickly move on to another location also requiring prompt attention. Full repairs, on the other hand, should be completed with the area cut out, filling, and resurfacing, within 28 days.

It should also be remembered that some potholes result from bad reinstatement on the part of the utility companies. SCC must, by law, allow utility companies to dig up the road. Furthermore, it is obliged to allow them 3 months to complete reinstatement. Often they just leave "a mound of tarmac", obviously hurriedly put in place. Sometimes, if the dig is too deep, there is time allowed for settlement. If they are trying to locate a fault but without success, they may leave temporary reinstatements.

The number of utilities excavations and bad quality reinstatements at any point in time, in Surrey, far outweighs the capacity of SCC to employ inspectors to call the utilities to task. It would need an army of them. Unfortunately, national government does not currently give enough power to local highways authorities to deal with this matter, for example, via a system of fines. The net effect is that, ultimately, the cost of putting things right falls on the local taxpayer. There is clearly a misalignment of priorities between making sure residents have utilities delivered and ensuring that roads are repaired properly by utilities companies afterwards.