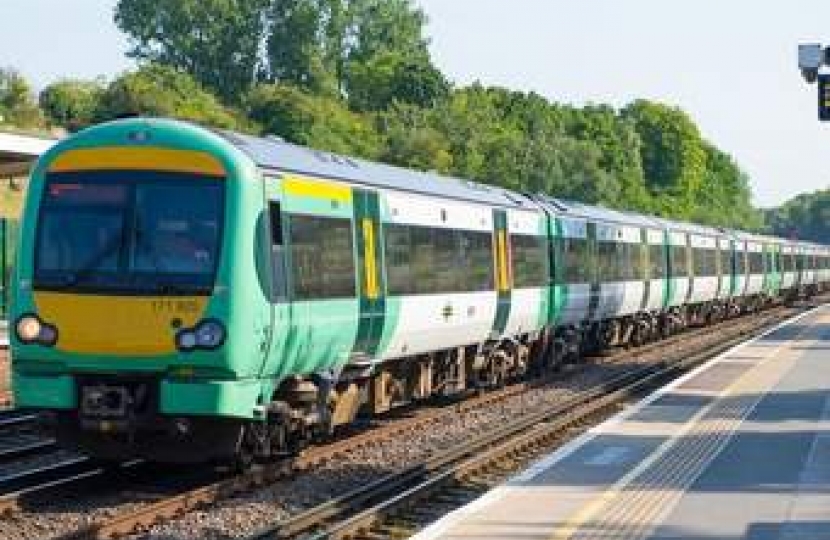 It has taken some time for me to obtain an official response from Andrew Jones MP, Under Secretary of State for Railways, to the letter I sent to him following our meeting on 13th March, during which we discussed the issue of the Redhill Fares Hump.

However, a reply has now been received and is attached below. It lays out the Department for Transport’s position. We still await a statement as to how the fares hump will be addressed over the coming two years until the end of the current GTR franchise.

In the meantime, it is encouraging that the DfT is looking at ways of simplifying the complex commuter fares structure to make it more transparent and enable passengers to purchase the optimum fare for their journeys in the future.

The recent DfT ‘Pay-as-you-go on rail (PAYG)’ consultation https://www.gov.uk/government/consultations/pay-as-you-go-on-rail, which closed on 1 May, sought public views on proposals to extend pay-as-you-go rail fare systems and possible changes to fares. The responses are currently being examined and the outcome will be published in due course.

Additionally, the ‘Williams Rail Review’ has been established to recommend the most appropriate organizational and commercial frameworks to support the delivery of the government’s vision for the railways, including the franchising structure, in such a way as to facilitate a reformed fares structure. I will be discussing a joint response to this with the Rail Delivery Group and RRDRUA in the near future. Details of this can be found here: https://www.gov.uk/government/consultations/williams-rail-review and the closing date for responding to the consultation is 31 May.

Meanwhile, on a separate and unconnected initiative, Govia Thameslink Railway (GTR) has recently launched the engagement process for its £15m ‘Passenger Benefit Fund’, which aims to provide tangible improvements for passengers on the GTR network. The fund was established following the disruption experienced by passengers during the implementation of the May 2018 timetable. Stations in our area are set to receive the following sums to make improvements for passengers:

I am currently working with Reigate and Redhill District Rail Users Association (RRDRUA) and GTR to ensure that the money is spent wisely. Unfortunately, none of our local stations have received any GTR ‘Access for All station’ improvement grants to make them step-free and accessible to all passengers, but we are engaging with GTR and Network Rail to see what can be done additionally to improve local stations by other means.

Action on local fares is long overdue. We now have the prospect of some progress. However, the strategic reorganization of the rail franchise system and national fares structure means that DfT currently has little appetite to put more work into further local ‘case by case’ fare anomalies such as the Redhill Hump. The commitment we secured is the exception and not the rule.

Some progress is being made and the unfairness of the ticketing system in our area has highlighted the need for strategic changes in the fares structure in the future. I will press for these changes to be put into effect sooner rather than later.

After meeting with the Rail Minister, Chris Heaton-Harris MP, yesterday (11 February 2020), he instructed the Department for Transport to seek details from GTR about how they will deliver the removal of the Redhill Fares Hump. This is currently subject to a ministerial undertaking by the then Rail Minister made on 18th October 2018. This was to be completed by the end of the current franchise in 2021 but no progress was made towards it, with across the board fare rises at the start of 2020. That lack of progress led to the latest meeting with the rail minister.