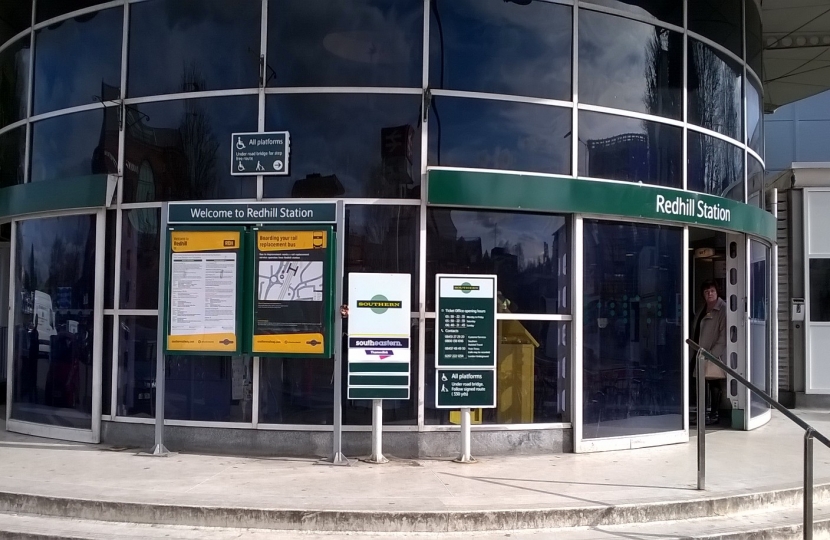 In overcrowded south-east England, the maintenance of adequate transport infrastructure is crucial. Without it, local destinations become increasingly difficult to access and congestion mounts leading to frustration for travellers and damage to the local and national economy.

This is particularly true when an area is subject to rapid development and the building of large numbers of new homes which increase pressure on the local transport systems that have not been upgraded to accommodate increased usage.

However, major transport improvement projects are notoriously expensive and long in gestation.

In Reigate, I am currently working on three fronts to try to alleviate a chronic lag in transport infrastructure development.

The first area I am concerned with is the local rail network which is currently at breaking point. Whilst the situation has been exacerbated by the current industrial dispute between Govia Thameslink Railways (GTR) and the RMT union over the introduction of Driver Only Operated (DOO) trains, the underlying state of our local rail service has been deteriorating for a number of years, resulting in less services, delays and cancellations, overcrowding and a legacy of anomalously high fares. It is no longer possible, for example, to get a direct train from Redhill station to the South Coast of England, even though it sits on a branch of the main Brighton line.

As with most transport issues, there is no quick fix, but I am working with local stakeholders and the local District Rail Users Association to put pressure on GTR, Network Rail and the Department of Transport to invest in new local rail infrastructure such as points and signals improvements and a new platform at Reigate station, without which improved and more reliable services are simply not possible. I know that improving the Southern Rail network is a matter of priority for the government.

The second transport infrastructure area I am working on is a road project to incorporate a roundabout new traffic flow system at Hooley where the M23 meets the A23. This would enable access to the local motorway network from Redhill and Merstham and reduce congestion on the M25 at Junction 8 and on the A217 into Reigate. Such major road projects have to be prioritised by Highways England before they are chosen for inclusion in five year road improvement programmes. We are currently trying to include this project on the 2020-25 road works programme. In this context, it is encouraging that the Chancellor has recently set aside £1.1bn to reduce congestion and upgrade local roads and transport networks.

Finally, I am currently involved with discussions with The Aviation Minister, the CAA and Gatwick Airport about how they manage take-off flight routings, in view of the recent marked increase in departure traffic from the airport. Incidentally, the recent decision not to build a second runway at Gatwick makes sense, if only for the reason that the airport is not served well enough by local transport infrastructure to accommodate such expansion.

Local residents under the new PR-NAV concentrated take-off flight paths are enduring unacceptable levels of persistent aircraft noise. I am working to influence future flight navigation policy in favour of dispersion rather than concentration to enable residents to have at least some periods of respite from incessant aircraft noise.

All these initiatives are important because of the huge increase in demand for transport services we have seen in recent years. Living in an area of such a concentration of transport networks is bound to result in some negative side-effects in terms of noise and congestion, but without such improvements, our economy and quality of life may be unacceptably compromised.

My worry is that, with some notable large-scale exceptions, too many transport infrastructure improvements are retrospective and not forward thinking. The result of this is that we are playing catch up all the time instead of planning ahead for future growth which is needed if we are to retain our position as a leading economy in the post-Brexit world.