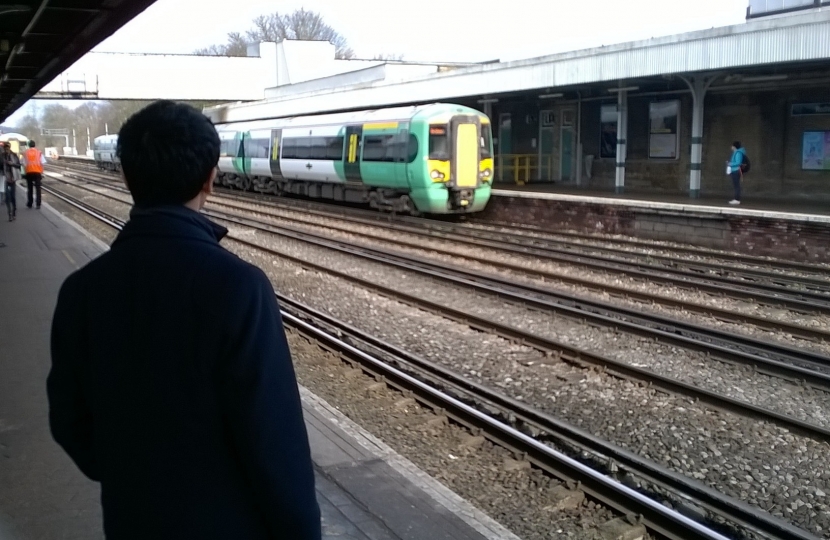 Not surprisingly, I continue to be inundated with complaints from local constituents about the ongoing disruption and regular delays to rail services from our local stations, particularly, Redhill and Reigate.

In 2014/15 Govia Thameslink Railways (GTR - which includes Southern) recorded second worst punctuality record in England. That somewhere else could be worse defies belief. The Secretary of State issued GTR with a Remedial Plan Notice requiring them to set out the measures they will take in order to improve performance. So far this year, the 5.49pm service from London Victoria to Redhill has arrived more than five minutes behind schedule 45 per cent of the time, for example.

This appalling punctuality record has recently been made even worse as a result of both official and unofficial industrial action currently being taken by RMT over Govia Thameslink Railway’s proposed changes to Driver Only Operation (DOO) Services and resulting conductor shortages.

The disruption that thousands of rail passengers have had to face in recent months is unacceptable and the current industrial action is causing further unnecessary distress to the travelling public.

As MP and President of the Reigate and Redhill District Rail Users Association, I have been working constantly to try to address the exceptionally poor service and timetabling affecting our services and the fares pricing anomalies that discriminate against users of local stations.

In this context, I will be meeting Patrick McLoughlin, Secretary of State for Transport, in June and will be pressing again for some answers to the anger of local rail users about the service and the fare structure from stations in my constituency. In particular, I will be calling on him to take a positive decision on Zone 6 for our stations.

Longer term, I look forward to the completion of the London Bridge works, the introduction of new rolling stock and a new timetable by 2018. I will be working to ensure that a better functioning and more sustainable railway service is put in place to manage the long term needs of local rail users; this should include better and more frequent timetabled services for local commuters who have had to put up with significant disruption on the promise of better services at the end of the works. But goodness help us Gatwick is approved for a new runway as the new capacity would be overwhelmed.

Driver Operated Trains will inevitably become the norm across the rail service and that the role of conductors must change with the times. The new trains being introduced on the network will be fully equipped with the latest technology that allows the driver to fully operate the train from the driving cab, in line with modern practice. This releases conductor staff to concentrate on looking after passengers on board the trains. Roll on the time when we have driverless trains, but another generation to go on that.

Furthermore, GTR has publicly stated that there will be no compulsory job losses as a result of this modernisation and affected conductor staff will have their pay protected.

It can’t be right for the RMT to further intolerable disruption on the travelling public. They may just being driverless trains forward.

I share my constituents’ frustration at the current appalling service and will continue to  press those responsible for both short and long term improvements.