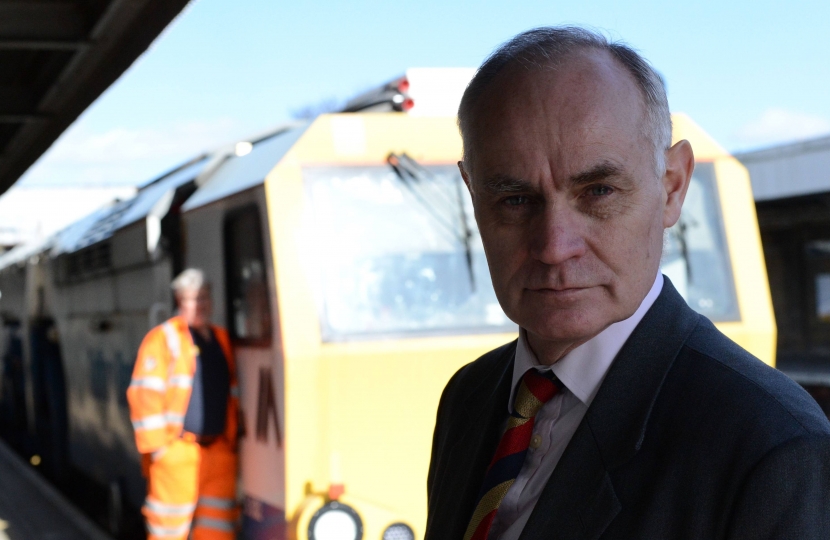 After becoming MP for Reigate in 1997, Crispin worked tirelessly to improve the local rail service. The Reigate constituency relies heavily on rail links for its economic prosperity. Many local residents commute to London, and local businesses rely on workers traveling into the constituency to work, especially to Redhill and Reigate.

Crispin is the president of the Reigate and Redhill District Rail Users Association (RRDRUA) and used his influence as an MP to press the Department for Transport (DfT), Govia Thameslink Railway (GTR) and Network Rail (NR) to improve conditions for local rail users.

Most recently, Crispin has been focusing on three key areas affecting the quality and reliability of our local rail service.

i) Unfair Local Rail Fares - Rail fares from local stations including Reigate and Redhill have been more expensive than equivalent tickets from other local stations for a number of years. This is known as the 'Redhill hump.'  After years of campaigning, Crispin has recently elicited a promise from the DfT to eliminate this price anomaly before 2021 and in the meantime to freeze certain ticket prices.

ii) Poor and unreliable timetabling -  Along with RRDRUA, Crispin has been pressing GTR to make improvements to their proposed 2018 Timetable on the Redhill and Reigate lines. He has recently sent a petition to DfT and GTR, signed by over 2,200 local rail users demanding improvements, especially to the speed and regularity of services to London, the lack of any direct trains from Redhill to Brighton or the south coast, and the paucity of night-time services.

iii) Poor local rail infrastructure - Crispin has been pressing Network Rail and DfT to prioritise local rail infrastructure work that would improve local services and train reliability. These include new signaling, points and a flyover at Stoats Nest Junction (near Coulsdon South) to enable London bound trains to cross onto the fast track, and a new platform at Reigate Station to allow 12-car Thameslink trains to terminate there and enable regular fast services directly from Reigate to London Bridge.