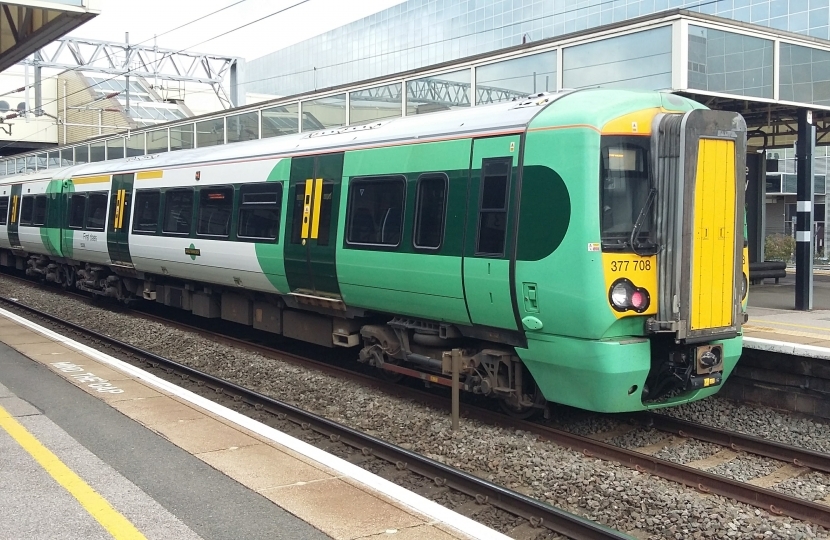 Following a summer of disruption, I have today received news from Govia Thameslink Railway (GTR) of a change (improvement) in services with effect from September. Thankfully this will include the reintroduction of direct fast services to London Bridge on the Tattenham Corner Line on a 30-minute basis, and the return of stopping Thameslink services to intermediate stations on the Redhill line, including Earlswood and Salfords.

To support the return of schools and colleges, a new weekday timetable will be introduced to Southern, Thameslink, and Great Northern services from Monday 6 September 2021. There is no change to weekend services. In addition to this wider change, a peak-time-only service will be reintroduced between Beckenham Junction and London Bridge via Tulse Hill from Monday 23 August.

To support the main change from Monday 6 September, journey planners will be updated from the weekend of the 28 August, and as this will involve changes to many routes across the network, GTR is asking customers to plan their journeys at www.nationalrail.co.uk

As well as supporting schools and colleges, the new timetable is designed to balance the needs of customers across the network. While more trains will run across the network compared to today, some individual routes will see a reduction to make these changes possible.

This is to ensure services are as reliable as possible for customers under the current circumstances of the third wave.  As a business, GTR continues to recover from the disruption of the past eighteen months in terms of how it has impacted its people, and coronavirus will, unfortunately, continue to have a legacy into the medium term.

Like every company in the country, GTR staffing levels are being severely affected by the pandemic and while changes to test and trace have helped with regards to the vaccinated staff, this challenge remains.

Taking train drivers as one example of key staff, at the height of the summer, nearly 1 in 5 were unavailable to drive with a mix of coronavirus-related absence, delays to essential training given social distancing, and many other reasons resulting in someone not being available to work or cover overtime. It will, unfortunately, take time for this impact to be overcome.

The timetable will be reviewed in December 2021. This is in addition to small changes and refinements if needed and if possible before then.

Looking to next year and beyond, the success of the UK’s vaccination programme is resulting in a steady improvement to crew and other critical staff availability and a gradual return of customers to the railway. With weekday customer numbers 40-50% below the period prior to coronavirus, there is still huge potential for growth but with new working patterns, no-one expects weekday passenger demand to resume back to exactly what it was for a very long time to come.

This does mean that services will be different in the future. Over the past eighteen months, GTR prioritised services for key workers and schools. In the future, it will need to adapt to growing leisure demand and what is likely to be reduced commuting. It’s for this reason that a larger service will operate on Saturdays than on weekdays -  a change from the past, but one that will support leisure demand.

GTR knows that customers rightly demand a reliable train service. What the past showed is that running more and more trains on fundamentally the same infrastructure inevitably resulted in delays and disruption on a congested network; with a small delay to one train rapidly having a network-wide impact on many more passengers, creating a domino effect. They acknowledge how frustrating this is. It was the right timetable for a world characterised by big spikes in rush hour commuting demand, but it is not right now, and is unlikely to be the right approach in the future.

GTR will continue to monitor demand and reliability and, where possible, will make changes based on feedback.

A briefing is included below on the changes to services from the 6 September:

From Monday 6 September 2021 train services will change across the Southern, Thameslink and Great Northern network on weekdays. The new timetable is designed to support the return of schools and colleges and to ensure services are as reliable as possible for customers.

As there was a reduction to five Thameslink and Southern routes from 26 July 2021, to help understand the changes on a route-by-route basis, the route guide below is described as relative to August 2021.

There will be an overall increase in both all-station and fast trains on the route.

There will be an additional two trains per hour on this route.

Fewer peak-time-only services will run between Orpington and Luton. Stations between Luton and St Pancras International have stops on the Bedford and Gatwick Airport via Redhill or St Albans to Sutton services referenced above.

Customers at stations on the Catford Loop should use the all-day service between Sevenoaks and London Blackfriars.

The one morning and evening peak Thameslink service will not run on this route from Monday 6 September. Southern services will continue to run. Customers travelling to/from London Bridge will need to change trains at East Croydon.

Direct fast services to London Bridge will be reintroduced on this route on an every 30-minute basis.

Services will run between Beckenham Junction and London Bridge every 90 minutes throughout the day. Additional services will run at school times to provide improved connections in the Dulwich area.

Customers at stations such as West Norwood and seeking to travel to or from London Bridge should use the “via Norwood Junction” option in www.nationalrail.co.uk journey planners to show additional journey options.

Most current peak-only services will not run on this route. Two, morning, peak services will operate (07:50 and 08:20 London Victoria to London Bridge) plus some late evening services. Customers should change at Norwood Junction for fast services to or from London Bridge.

One train per hour will run throughout the day. Most trains will now run with eight, rather than four carriages.

Fewer shuttle trains will run between Brighton and Hove, customers should use longer distance services from Brighton to and from Littlehampton, Portsmouth, and Southampton.

Fast services between Epsom and London Bridge will run every half-hour, the exception being a reduced frequency in the early morning. Trains from Epsom to London Bridge will depart at 05:45, 07:16, 08:15 then every 30 mins until 22:45.

The hourly service from Uckfield will run as half-hourly between 06:33 and 07:33 to support peak time and school travel on the route. The service will be hourly at busy times, but will reduce to every two hours in the middle of the day when trains are quieter in the following periods:

Over the past week, I have had many constituents write to ask my position on recent Downing Street Parties. A copy of this statement is below.