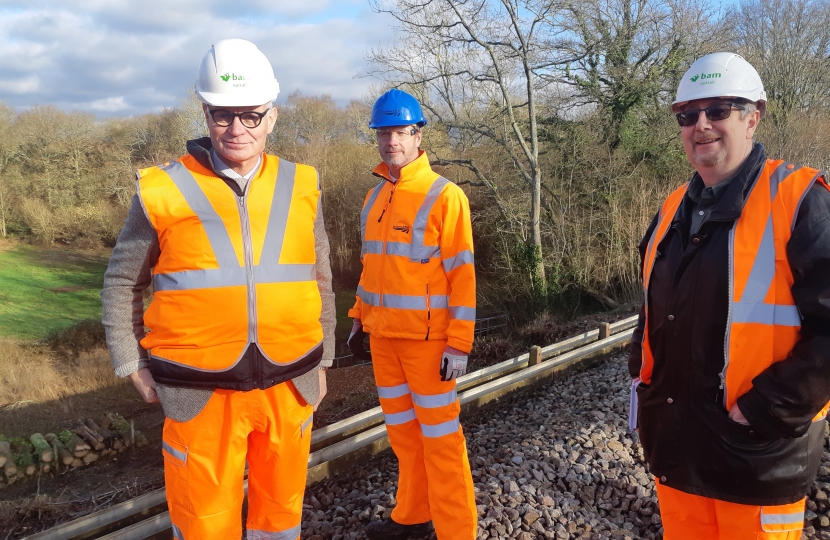 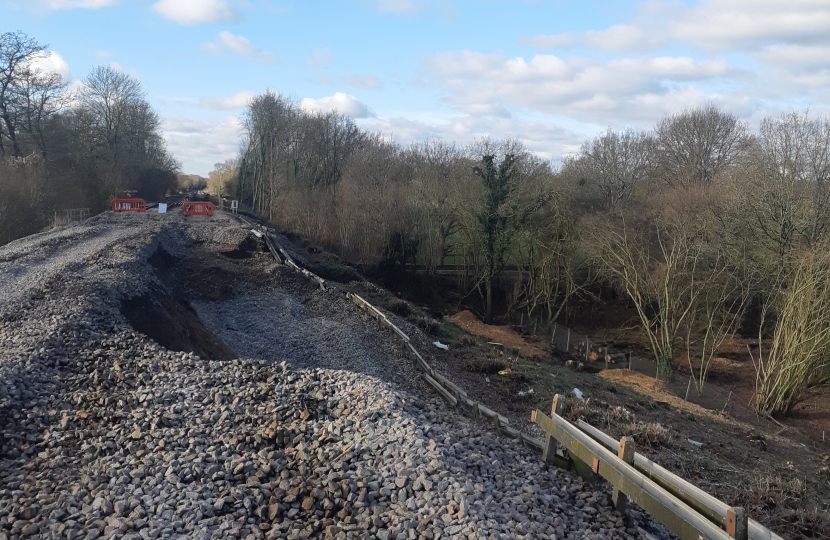 Following the serious landslip that occurred on the railway track between Godstone and Edenbridge on 22 December, I wrote to the CEO of Govia Thameslink Railway (GTR) in a joint letter with the two other MPs whose constituents are directly affected, Claire Coutinho (East Surrey) and Tom Tugendhat (Tonbridge and Malling), seeking further information and reassurances about the resulting line closure.

As a result of this, I was invited to visit the site of the landslip last Friday by representatives from GTR and Network Rail, to assess the damage and discuss the engineering schedule for repairs.

Clearly there has been a catastrophic landslide on this section of an embankment adjacent to a river, caused by water ingress after heavy rain, possibly by the river bursting its banks. The landslide has not only closed the lines in both directions, but it has also affected the route taken by a number of the railway’s electrical and signalling cables.

Adding to the problem is the fact that the site is quite inaccessible, being positioned between areas of farmland. As a result, the Network Rail (NR) repair teams have had to build a temporary road across a field in order that heavy plant, rock, and ballast can be transported to the site for repairs. On Friday, this new road was nearly complete so work on the embankment is expected to start this week.

This is a complex repair job which may not be completed until the end of March, though NR engineers are looking at solutions that may potentially reduce this time-frame. Despite some assertions to the contrary, I have been reassured that engineers were on the site within twelve hours of the landslide being reported and that everything is being done to expedite the repairs.

This is perhaps of little consolation to rail users who are having to rely on replacement bus services in the meantime. However, I am aware that there has been regular and cooperative dialogue between GTR and the Reigate and Redhill District Rail Users Association (RRDRUA) to try to improve the timetabling and frequency of these replacement services in response to concerns from rail users. Hopefully, this will result in as good a service is possible in the circumstances.

Along with my fellow MPs, I will continue to monitor progress and press NR to maintain or improve the repair schedule, whilst also holding GTR to account in terms of providing adequate replacement cover.

This disruptive incident is a salutary reminder to two key causal issues that the minds of politicians are currently focused on. One being the outdated nature of some of our underlying rail infrastructure, this embankment being well over 100 years old, and the second is changes to the climate apparently causing much more heavy rainfall than in years gone by.