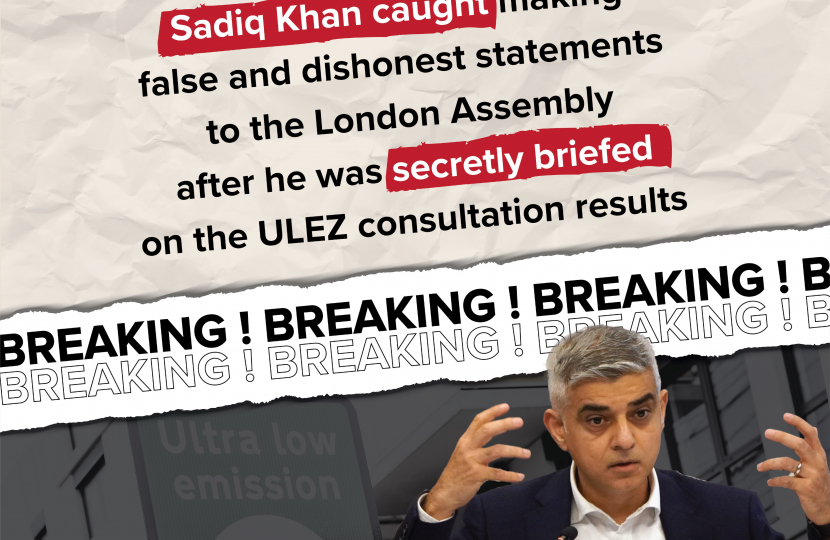 Sadiq Khan made ‘false and dishonest’ statements to the London Assembly on six occasions, as newly released documents expose a secret campaign by the Mayor’s office to manipulate the results of the Ultra Low Emissions Zone (ULEZ) consultation.

Internal correspondence released today proves that the Mayor was secretly briefed on the ULEZ consultation results on 29 September, contrary to his repeated and dishonest denials to the London Assembly. His senior advisers were also regularly briefed.

Nick Rogers AM has made a formal complaint against Sadiq Khan to the Greater London Authority Monitoring Officer, the statutory officer responsible for investigating any allegations of misconduct by the Mayor or London Assembly Members.

Seb Dance, the deputy mayor for transport, also made false and dishonest statements to the London Assembly when he denied on three occasions receiving the ULEZ consultation results in advance. In fact, the documents reveal that he and Shirley Rodrigues, deputy mayor for the environment, received weekly updates on the results alongside the Mayor’s senior advisers.

The documents released today have exposed “The ULEZ Scandal,” and comprise over 200 pages of internal correspondence and documents from the Mayor’s senior advisers and TfL directors during the final weeks of the ULEZ consultation process.

The correspondence reveals the Mayor’s office intervened in the consultation process, which skewed the results and reduced the percentage opposed to Sadiq Khan’s ULEZ expansion.

This intervention lowered the level of opposition in the final count by 3 percentage points (from 62% to 59%).

The Mayor’s office also used the interim results to launch a £165,000 digital marketing campaign in the final weeks of the consultation, focused on demographics more likely to support the ULEZ expansion, and tracked the impact it had on the final count.

And the documents reveal the Mayor spent public funds commissioning a YouGov poll in the final weeks of the consultation to re-run the main question, after his office was made aware of the level of opposition in the interim results.

Consultations by public bodies have status in law, and any improper interference in the results could be unlawful.

Nick Rogers AM, GLA Conservatives transport spokesperson, said: “We now have overwhelming evidence that Sadiq Khan has committed serious misconduct, by violating the integrity of the consultation and improperly excluding thousands of legitimate responses. The Mayor must now explain himself to Londoners, who participated in this consultation in good faith. This behaviour cannot stand and must be addressed by the appropriate authorities.”

Peter Fortune AM, deputy leader of the GLA Conservatives, added: “The files released today further reveal the Mayor’s contempt for the rules, his failure to follow due process and his disregard for the people who hold him to account. More importantly, it shows he never intended to listen to Londoners. Sadiq Khan has brought himself and his office into disrepute. He must face the consequences and apologise for his actions.”

Paul Scully MP, Minister for London and Parliamentary Under-Secretary of State for Tech and the Digital Economy, said: “These findings are very concerning. If the Mayor is going to push through such a punitive and unpopular policy, he has to have a grip on the detail. The London Assembly is responsible for the oversight of the Mayor of London. It can and should investigate this further.”

Reigate & Banstead Borough Council is making a time limited offer to match fund every £1 of private donations into the Community Fund for Reigate & Banstead, with a further 50p between now and 31 March 2023, up to a maximum Council contribution of £13,000.