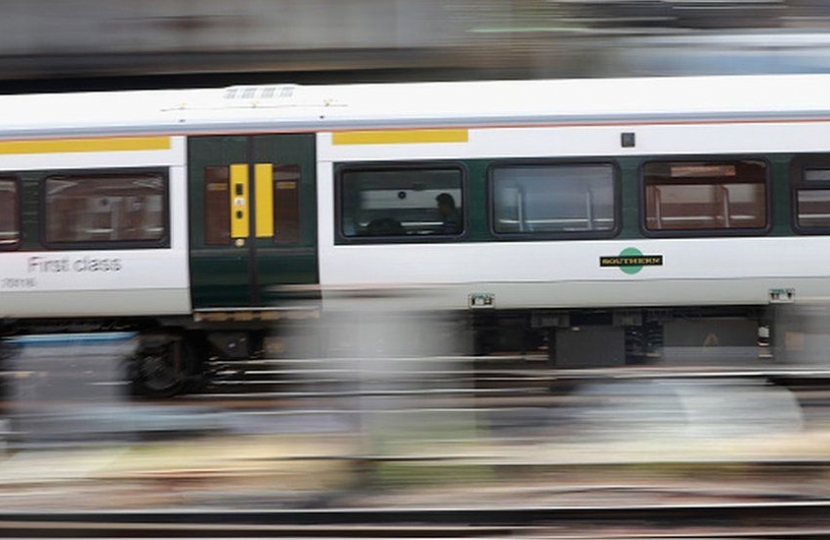 Since the New Year I have received much correspondence from local rail users, concerned about the current limited and unsatisfactory local rail service, especially as we are now in the process of a return to more regular commuter rail travel following the end of the ‘work from home’ directive.

Those commuters whose jobs mean that they have been unable to work from home have been particularly hard hit and I fully sympathise with their plight.

The sad fact is that the whole national rail network has been severely affected by the pandemic and especially the recent Omicron spike, resulting in shortages of staff, management, crew, and crew training, because of COVID absence, overlaid by a sea-change in railway usage and ticket sales during a time when many people were forced to work from home. This has had a serious knock-on effect on service, timetabling, and rail revenues.

The COVID pandemic has not only caused delays and cancellations, including multiple timetable changes, but it has also wreaked havoc on the financial viability of the current rail revenue model, and necessitated more public spending to keep the system going as ticket sales have plummeted.

In addition, the rail companies and DfT are having to second-guess the future numbers of rail users and their most likely patterns of travel as we emerge (hopefully) from the pandemic. These may be permanently changed from pre COVID patterns.

There has also been a lot of scheduled but disruptive upgrade and maintenance work over the past few of years on the Brighton Line, some of which continues (for example, current work at Victoria Station and the impending works involving the closure of the railway line between Three Bridges and Brighton for the upgrade of this section of line).

An update on my actions

Along with Reigate and Redhill District Rail Users Association (RRDRUA) and Est Surrey Transport Committee,, I have been maintaining regular contact with our main local rail service provider, Govia Thameslink Railway (GTR), urging them to do as much as they can to improve services, and would like to pass on their latest update to me on how the current inadequate timetable may improve, going forward.

GTR recognises that many customers from Reigate and surrounding stations will have a longer journey if they are travelling to or from London Victoria at the moment and will have to change trains at a time when customer numbers are slowly increasing, with an 8% point increase week on week to 45% of historic levels.

In late December as coronavirus cases rose, GTR needed a developed plan for January that would run reliably with fewer staff available, as absence levels then were very similar to the first UK lockdown, in excess of one fifth, when GTR had operated a Sunday service across the network.

They had two viable options available: either to introduce a Sunday service across the network, or to continue the plan that had been in place on weekdays over the Christmas period.

The latter choice had the benefit of a better match to standard weekday specification, more school trains and on Southern alone, and produced around 270 additional services per day, even though it had been planned around engineering work, most notably the closure of London Victoria.

Unfortunately, seeking to operate a larger weekday plan at that point would have, in all likelihood, been totally unsustainable with customers facing very significant disruption to the network. The priority was to ensure that customers could plan, even if that plan would involve a longer journey involving changes of train.

Choosing the current timetable was therefore a temporary timetable based on a viable contingency plan.

Subsequently, as crew availability has improved, GTR has managed to introduce services to London Victoria providing up to twelve services per hour, in addition to Southeastern’s services.

However, these services have been planned as largely additional to the current timetable, which is why many longer distance services remain on diversion to London Bridge, and in the case of Reigate’s services, to Tonbridge. This is so the underlying timetable could continue to run with new planning efforts built independently and in addition to existing services.

GTR now needs to move the network to a new timetable to be able to deliver more. While crew availability has and is improving, it is still slightly above the levels that would make a previous weekday service plan viable.

At the same time as introducing the current timetable, GTR began development of a new weekday service. This is usually an extensive process, up to forty weeks, to deliver a safe and reliable plan for the network. The experience of the past few years means that GTR can speed this process up by adapting existing plans, but a realistic timeframe is still around eight to nine weeks for the process to complete.

As a result, we will see two changes. The first, from Saturday 19th February to Sunday 27th February will see an amended timetable in place to support the closure of the railway line between Three Bridges and Brighton. The second will be a longer-term timetable introduced from Monday 28th February. Both timetables from a Reigate perspective will reintroduce direct London Victoria services on weekdays, so direct London Victoria services will resume from Monday 21st February. Weekend services will continue, subject to engineering works.

In short, the current timetable is temporary, which may mean longer journeys for the time being, but it is scheduled to improve in late February. I will continue to work with RRDRUA and East Surrey Transport Committee to press for continued improvements in the future.

We are delighted that we can confirm that Train Operating Companies will be offering free travel for serving military personnel and veterans to and from Services of Remembrance across Great Britain.