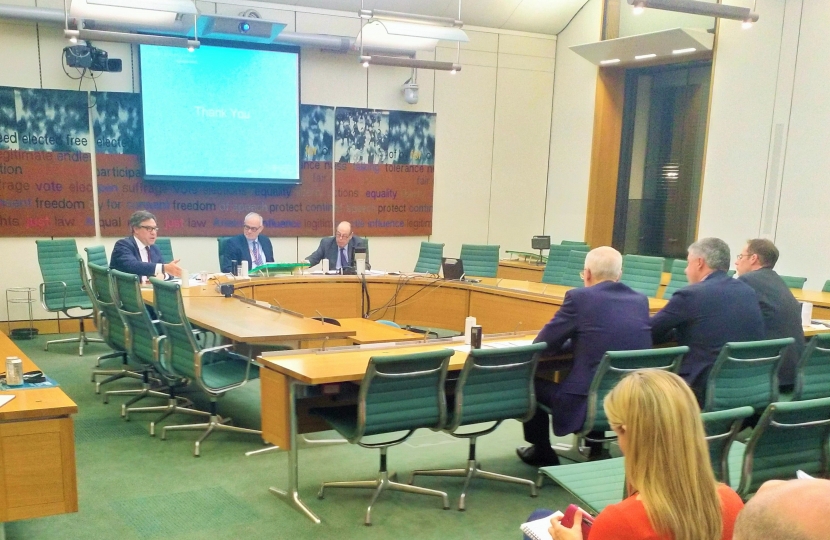 MPs of the Gatwick Co-ordination Group (GCG), which is chaired by Crispin, have today written a joint response to the Gatwick Airport Draft Master Plan Consultation expressing their opposition to the airport’s three expansion proposals.

One of the proposals included bringing into use the existing standby-runway.

The MPs, writing in a 5-page detailed letter, are concerned about the impact the expansion options will have on surrounding rail and road transport infrastructure, the local Green Belt, soft infrastructure pressures, and increased noise and air pollution. The letter can be found at the end of this page.

It follows a meeting between the Group and Sir David Higgins, chairman of Gatwick Airport Limited; Stewart Wingate, the Airport’s CEO; and Tim Norwood, its Chief Planning Officer, in Parliament on 5th December for a presentation on the Draft Master Plan and subsequent Q&A.

Commenting on the plans Crispin said: “Whilst there is no doubt that Gatwick benefits the local community in a variety of ways, even at today’s capacity a large number of concerns affecting residents all around the airport’s operating area already exist. These are not going to go away with the current proposals, they are set to get worse.

The Draft Plan plainly fails to address how additional passengers will affect the already crowded London to Brighton railway corridor and the A23/M23, and offers no assurances that Gatwick will not seek to become a three runway airport after securing permission to use the existing standby-runway.

Even by Gatwick’s most optimistic projections, noise under these Draft Plans is set to be the same or worse than today.

In its current format this is not a proposal we can support and I trust Ministers will promptly realise upon review the damage this would cause to the area.”

The consultation closes on 10th January and submissions can be made through this link: https://www.gatwickairport.com/business-community/growing-gatwick/long-term-plans/.