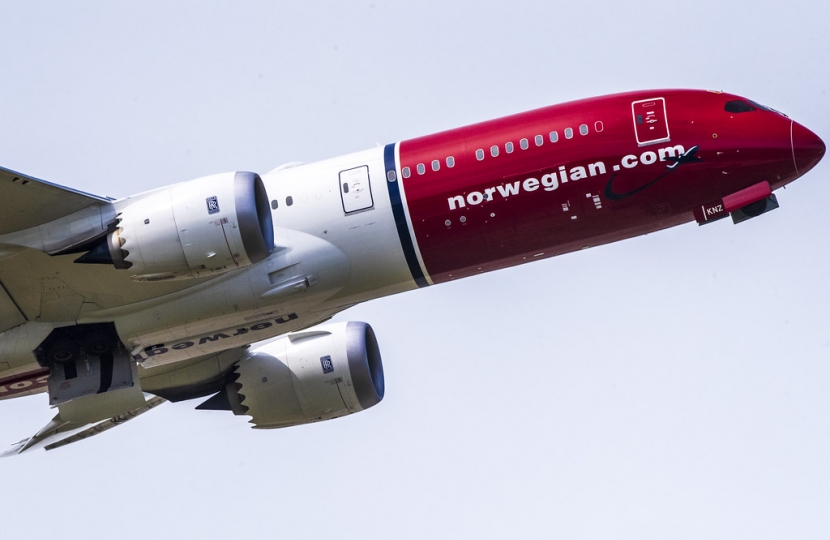 Whether one has followed this issue closely or is simply reacting to the latest news, I wholly appreciate and fully understand the current frustration felt by many of my constituents about yet another proposed move to the track of Gatwick Airport’s infamous take off Route 4, this time back to something replicating its pre-2012 path, which is more northerly than the existing route and has the potential to affect larger swathes of populated area, especially to the south of Redhill and Reigate.

However, let us first put this in its medium and long-term perspective. There is a re-organisation of UK and European airspace management going on, in which London and South East airspace is an important part. I understand that this more profound work will be concluded by 2026 – 2028 following the completion of Heathrow Runway 3 and should involve the de-conflicting of the Heathrow stack, affecting flights in and out of Gatwick. This should bring the opportunity for aircraft to climb faster in their departure from Gatwick, impacting fewer people, and also, establish routes that can be optimised to minimise their impact.

Within this discussion is a debate about the current Department for Transport policy which is to concentrate routes over the fewest number of people, whereas I and other MPs in the Gatwick Co-ordination Group wish this policy to change to enable dispersion so that pain from aircraft noise is shared. There is a review ongoing to which your local MPs will contribute their views and at some future time may ask you to contribute too.

This proposal will undertake a formal consultation subject to/on reaching Stage 3 of the process.

We are now also dealing with the implications of a Judicial Review of Gatwick Airport Limited’s (GAL) change from its pre-November 2013 routing to the current Route 4, and the CAA’s subsequent refusal of that proposal. The CAA accepted that GAL’s consultation on this change, from the previous Route 4 that overflew southern areas of Reigate and Redhill, was not conducted properly because the CAA misunderstood the reasons why the ‘old’ Route 4 was north of the Noise Preferential Route centreline. (see attached)

If you are still following the thread of this explanation, we are now in the ironic position of facing an apparently inadequate ‘feedback exercise’ about a temporary reversion to an unpopular routing ( which will exist until the new permanent Route 4 ACP is concluded). The CAA is concluding the ‘old’ Route 4 airspace change proposal in accordance with the terms of the Judicial Review and has actually gone further than the process requires in offering an opportunity for stakeholders to feedback on any examples of where they think the CAA may have misrepresented or misunderstood the information it has been provided with.  All of this seems to be driven by the legal framework that surrounds the CAA’s processes and the decisions that GAL must make in consequence.

According to the CAA: “The Draft PIR issued after Christmas is the conclusion and ultimate refusal of the ‘old’ Route 4 airspace change proposal (under the ‘old’ Airspace Change Process (ACP) CAP 725) which will return the airspace to the pre-Nov 2013 status quo. We have opened a 28-day feedback window (not a consultation) because we adopting ‘good practice’ principles from CAP 1616 process on a CAP 725 ACP; CAP 725 did not require a feedback window on our draft PIR.”

Ironically, of course, the intention of the law and policy is to best protect the interests of the public.

Inevitably, as far as routings over the local area are concerned, I represent different interests in the local community. My team and I have spent much time over the last few years trying to reconcile the views of different community groups and to get them to agree on an approach I could make to the various authorities (DfT, CAA, and GAL) as representing the best inevitable compromise. Unhappily, I have not been able to bring the groups together, which is one of the reasons that we find ourselves in today’s position where the process and the underlying law are now taking their course. I regret the inability of Plane Wrong to meet Plane Justice halfway.

What is clear, however, is that the current feedback period (the CAA is not running a ‘consultation’, but has asked for specific feedback, beyond its normal process given the understandable sensitivities) is wholly inadequate in duration and is, therefore, the focus of much understandable irritation. I am seeking clarification from the CAA as to whether the ‘feedback window’ can be extended or whether it is a ‘fait accomplis’ and the short window on this temporary solution is simply a paper exercise, as implied in the GAL’s statement that ‘a longer consultation process would confuse the public and create consultation fatigue.’

It, therefore, seems that, unless there is substantive feedback on any examples of where stakeholders think the CAA may have misrepresented or misunderstood the information it has been provided within conducting the PIR, then the temporary reversion of Route 4 is likely to take place.

Please be assured that I will continue to do what I can to ensure that a fair and equitable permanent solution is found for Route 4, and to press both for constraints on the expansion of Gatwick Airport and improvements in airspace design in the future to minimise the effects of aircraft noise on residents.