Full statement on Renewal of Trident 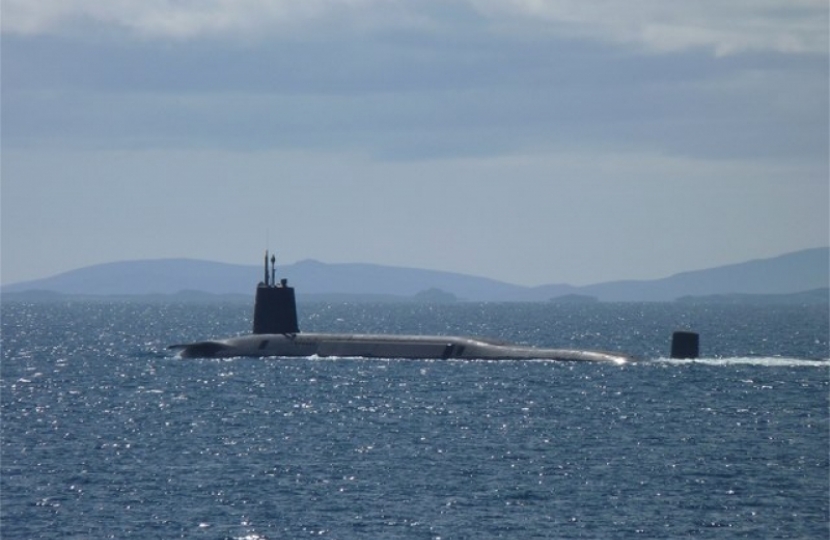 I oppose the renewal of Trident because I care about the security of my country.  I’m not prepared to be party to the most egregious act of self-harm to our conventional defence.  This is a colossal investment in a weapons system that will become increasingly vulnerable and for whose security we will have to throw good money, after bad – in fact tens of billions of it more than already estimated – to try to keep it safe in the decades to come.

Britain’s independent possession of nuclear weapons has been turned into a political touch-stone for commitment to national defence.  But this is an illusion. The truth is that this is a political weapon, effectively aimed against the Labour Party, whose justification rests on the defence economics, the politics, and the strategic situation of over three decades ago.  However, it is of less relevant to the defence of the United Kingdom today and certainly surplus to the needs of NATO.  It certainly doesn’t pass any rational cost effectiveness test.

It is a weapon system that does give British ministers a certain status in the world, but it is our responsibility as a Parliament to ask if the colossal cost is worth propping up the self-confidence of our senior ministers when any decent analysis will suggest that this self-confidence is based on a flawed appreciation of the actual utility of this weapon system.  Surely the conventional failures, the ignominious retreats from Basra and Helmand in the last decade, tell us that something is badly out of balance in our strategic posture.

Then let us not forget the risks that this particular weapon system presents to the United Kingdom. Basing it in Scotland strengthens the nationalist narrative. Ironically for a system justified on the basis that it protects the UK, it could prove instrumental in the Union’s undoing. And if that happens, it will add many billions to its costs as alternative basing arrangements are found in England.  It’s true that the ending of the English subsidy of the Scottish budget could pay for this rebasing, but is that really what unionist parties actually want?

We were told last November that the capital costs for the replacement of the four Vanguard submarines would now be £31bn, with a contingency fund of £10bn. We’ve also been told that the running costs of the Successor programme will be 6% of the defence budget.

What do these numbers actually mean?  At this level this one programme will consume around a quarter to a third of the defence procurement budget for the whole of the next decade.   Running costs at 6% of the defence budget are twice the proportion of the Vanguard programme. This is unsurprising as Defence’s share of GDP is under half what it was in the 1980s. The Ministry of Defence answer on running costs will have been based on assumptions of a forward defence budget of 2% of GDP, and this could come to a programme total of the order of £180 billion.

The costs of this project are enormous. I’ve asked a number of colleagues privately at what point do these costs become prohibitive?   I can’t get an answer, short of those who say whatever it takes.  Surely an answer of infinity is completely irrational.  It’s not only damaging to our economic security, with a fixed share of our nation’s wealth being spent on defence, this comes at deeply injurious opportunity cost to our conventional defence.  At what point do either of these prices cease to be worth paying?

If only that was the end of it. The costs are likely to rise much further than we have been told for a number of reasons.

The standard programme risks, already apparent with the Astute programme, and the currency risk, pale when compared to the technical risk with this project.

There is a growing body of evidence that emerging technologies will render the seas increasingly transparent in the foreseeable future.  Under development are distributed sensors detecting acoustic, magnetic, neutrino and electro-magnetic signatures, on board unmanned vehicles in communication with each other, using swarming algorithms and autonomous operations associated with artificial intelligence, able to patrol indefinitely and using the extraordinary processing capabilities now available and improving by the month.  The geometric improvement in processing power means your smart phone is far superior to that of the latest US fighter aircraft.  Furthermore, unmanned aircraft will detect the surface wake of deeply submerged submarines communicating with those underwater receiving active sonar.  Marine biologists are already able to track shoals of fish in real time from several hundred miles away.

Ballistic missile submarines depend utterly upon their stealth by utilising the sheer size of the oceans. If we are today able to detect the gravitational waves first created by the big bang, how can we be so confident that a capable adversary would not be able to track our submarines 20 years from now?

At the very least, to defend against these developments there will need to be a massive and adaptable investment in stealth technologies that will send the price of the Successor far higher than current estimates. At the very least. More likely we will end up spending this additional budget, and still have to operate a system that is more vulnerable.

The system vulnerabilities are not restricted to its increasingly detectable signatures. What about the security of the Trident system from cyber attack?  We will be spending several tens of billions on our nuclear weapon system in order to threaten our adversaries with nuclear attack. There is every incentive for them to invest in offensive cyber capabilities at a fraction of this price in order to neutralise them. The systems are vulnerable through the components that are supplied to BAE systems, through the period of assembly, when the submarines are in refit, or when they are being restocked between patrols. The air-gap with the internet provides only minimal protection, as the Stuxnet attack on the Iranian centrifuges demonstrated.

To properly defend against such threats far stronger protocols would have to be introduced than exist currently, at significant cost and inconvenience. You can bet that the cyber defence of these systems alone will also mean the budget of this programme will get out of control.

If in future we are uncertain that Successor is not being tracked we cannot be certain that it will not be eliminated in the early stages of a crisis. This elimination would happen in international waters, and because we are not in communication with our submarine it may even happen without our knowing. All of this investment could well be for nothing at the moment we might actually need it.  Having been deprived of it could lead us to be worse off than having never had it, when our strategic choices would have been more realistic over the previous decades.

Part of the Government’s case is that all the other P5 states are also investing in submarine technology for their nuclear weapon systems.  Now it wouldn’t be the first time states follow each other down a dreadnought blind alley but the UK is the only nuclear armed state to depend entirely for its nuclear deterrent on a single submarine on patrol.  If NATO’s technical head of anti-submarine warfare can foresee the end of the era of the submarine our P5 partners at least have their bets laid off.  We won’t.

This issue of vulnerability is key.  There is a clear direction of travel in defence against big platforms in favour of distributed capability.  Are we really in 2016 going to bet the shop that the foreseeable risk to these massive steel tubes does not include the period before 2060?

We are told that CASD (Continuous At Sea Deterrence), continuous patrolling, is the absolutely the only sensible option; that deterrence is permanent and active every day.  So would be the conventional hard power and the awesome amount of soft power that could be procured instead.  If it has to be CASD and there is no alternative, then for my money, and more importantly the taxpayers’, we can no longer afford to be in this business. For a nation the size of the UK this decision is going to come at some point, wouldn’t it be wiser to face up to this now, whilst we are having to undertake a strategic rethink of our role in the world.

However I don’t buy the CASD argument, which it should be noted belongs to the Navy, their submariners in particular, and their chief champion, the Chairman of the Defence Committee, Dr Julian Lewis MP.  It should be noted though that his predecessor Chair, Lord Arbuthnot, has come to the opposite conclusion, as has the former Defence Secretary, Lord Browe of Ladyton.  The rest of us need to start challenging the alternatives review and its assumptions.

I am not a unilateralist and I believe we can affordably remain a nuclear power.  I want to challenge the 2013 Trident Alternatives Review that had incomprehensible assumptions such as the projected 24 years it would take Aldermaston to produce a warhead for an alternative nuclear delivery system. Indeed, there are modernised free fall designs which could be developed at Aldermaston or we could design a British variant of the American B61-12 warhead relatively cheaply.

We should be considering alternatives, such as deploying these modernised free-fall bombs on the new F35 jets we are buying from the Americans. Such a system would be a significant contribution to NATO’s nuclear posture, tailored to the type of threats NATO could face in the worst conceivable scenarios, at a fraction of the cost. If we gave ourselves half the proposed budget of Successor to play with we could also acquire F35Cs instead of less capable but more expensive F35Bs, more maritime patrol aircraft, 4 more frigates, 5 more Astute submarines, and re-engineer our aircraft carriers to launch fully capable aircraft.  Investing in such a dual-capable system would free up scarce resources for other capabilities desperately needed for Britain to play the international role that matches our responsibilities and position within the NATO Alliance and on the UN Security Council.

Rather like the weapon system, this debate is about politics rather than the substance of security.  If we were applying any rational application of available resources to meet threats to the UK we wouldn’t be going down this route.  Labour colleagues are trapped in the controversies of the 1980s in more ways than one.  I don’t believe my own party is properly thinking about this, having subcontracted that to Dr Julian Lewis.  We wish to seem resolute on defence, but the deep irony is that we are doing fearful damage to our conventional defence and acquiring an expensive liability in the process.