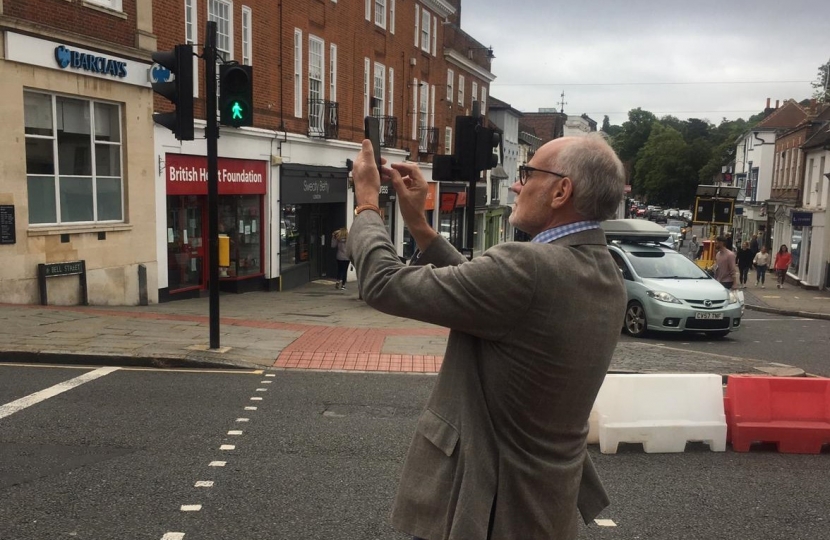 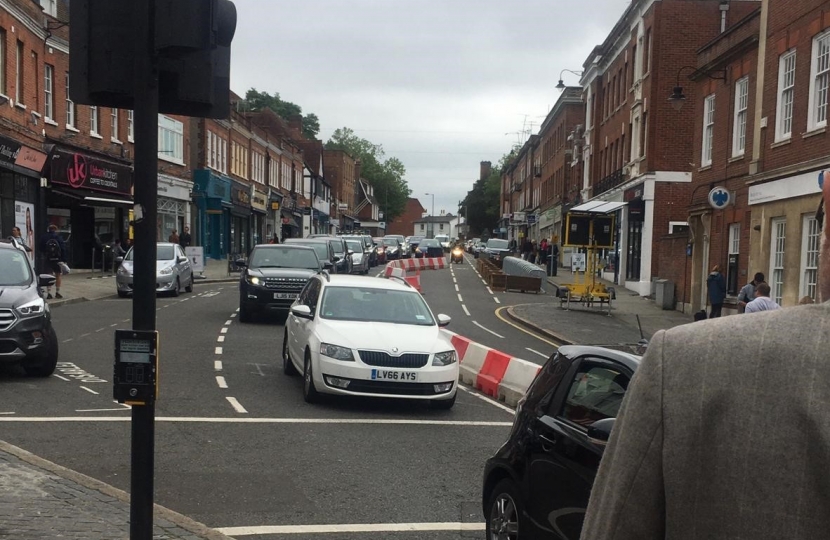 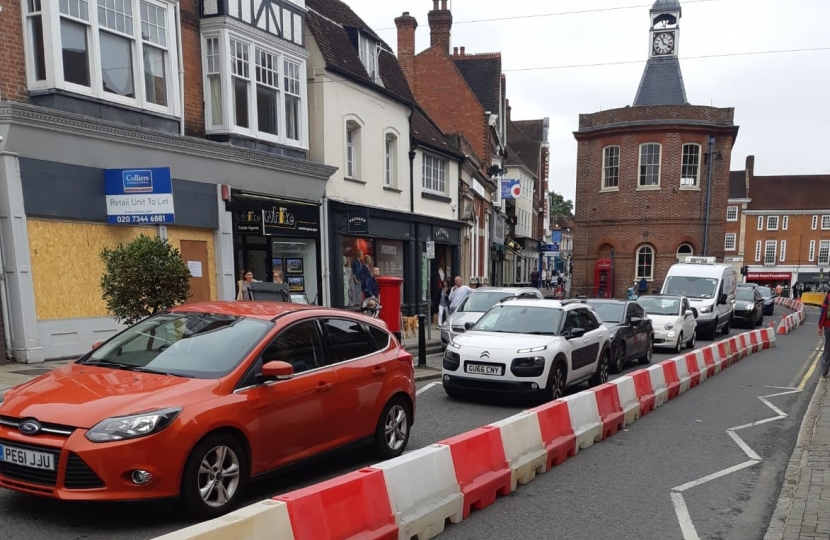 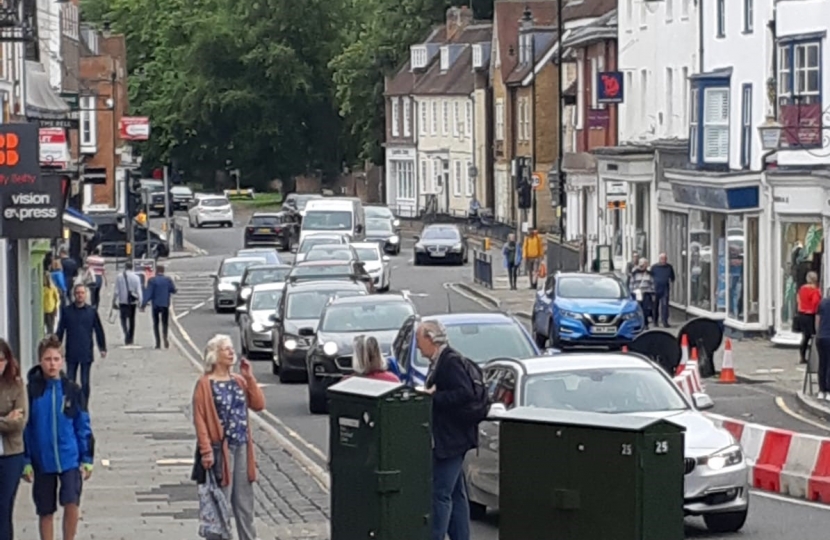 Following the predicted large build-up of queuing of traffic on Saturday on the first day of a cycle lane trial along Reigate High Street and a deluge of messages to Surrey County Council (SCC) and other local political representatives Cllr Tim Oliver, leader of SCC, came to see for himself on Sunday in Reigate High Street. He also met with community and business leaders, local Surrey Cty Cllr Zully Grant-Duff, and Gareth Owen from my constituency office.

Following his visit, Cllr Tim Oliver messaged me to say that it was his view that the cycle lane scheme, imposed at short notice on Reigate High Street as part of a quick impact fund from DfT for sustainable transport options and part of Covid-19 emergency expenditure, is not achieving what it sets out to do for cyclists or is essential for social distancing for shoppers. He would discuss with his officer team and Cllr Matt Furniss, Transport political lead,  removing the scheme as soon as possible.  I’m pleased to say these instructions have now been given and the barriers are being removed.

I very much welcome the personal intervention of the Leader of Surrey County Council and commend him for listening to local concerns so promptly. I also thank Cllr Matt Furniss for engaging personally on this as well, over the last few days.  We should recognise the challenges faced by SCC Highways officers to put in place schemes required by the terms of the DfT funding at very short notice without time for consultation. This is a particular challenge in Surrey where the road structure is under the highest pressure in the country, not least Reigate High Street, already a regular bottleneck. One misdesigned scheme from hard-pressed county officials is understandable and I welcome the rapid intervention of the political leadership to put it right.

I also welcome the fact that most of the other 25 plus schemes they are delivering in Surrey are welcome and delivering benefits for sustainable transport.

I look forward to working with local Surrey County Cllr Zully Grant-Duff, the Borough Council, and local business representatives, on alternative means of achieving the benefit sought for local cyclists. A promising option through Priory Park will be first to be examined.

The barriers will be taken out tonight  (6 July). On the High Street, the 20mph advisory speed limit and cycle parking facilities, which do not affect flow, will remain for time being.

I spoke to Matt Furniss, the Surrey County Council Cabinet member for Transport on the phone from Reigate High Street just before 2pm today. To his credit he had been on the High Street during the morning observing the new cycle lane scheme. He saw cyclists and traffic moving down the High Street. I saw cyclists, on the pavement, not in the cycle lane, and I saw the traffic moving at 20 mph once it had reached the one lane section. What I also saw was the very long queues of traffic coming down Cockshot Hill backed up on the A217 and the long queues of traffic coming from the direction of Redhill on the A25. This is on a COVID Saturday with the gentle easing of the lockdown. The traffic delay should not be like a bad rush hour on a working day. The businesses I spoke to were uniformly depressed as business was low and as long as this scheme is in place it will be very difficult for the destination traffic to access Reigate businesses, so they won’t. A rotten way to burden them as they just reopen after lockdown.

I had already formally requested this scheme be immediately withdrawn as the local response has been unanimous to the County Council although there has not been a formal consultation process. They can be in no doubt of the views of the local businesses, local cyclists, and Borough County and Parliamentary elected representatives. However County Cllr Furniss was determined to continue to see how this scheme would get on. He has promised me a daily update and would seriously examine removing this scheme after one week rather than the initial three week period. Other schemes the County have put in the Borough under this quick impact money from the DfT have been welcomed. Of 25 schemes across Surrey I told him he and his officers might be allowed one dud with no time to consult properly. But this cycle lane scheme on Reigate High Street is an absolute howler and if normal traffic and delivery flows occur next week it will be a very uncomfortable experience all round. Whilst I hope traffic avoids this massively worsened existing bottleneck, if it does, it’s imperative it’s not seen as a success for the scheme, as it will have been very bad for the town’s economic sustainability.

Today I was appalled at the predicted traffic chaos in Reigate.

I have now spoken to two Surrey Council cabinet members about my concerns around this nonsensical cycle scheme. Yesterday I formally asked for the scheme to be abandoned and I have reinforced that request today.

This follows on from concerns delivered privately by local Cty Councillors over previous week and a further discussion I had about the scheme with SCC Highways Department at a briefing of all Surrey MPs yesterday.

I understand that all Reigate representatives are united in opposition predicting events. We can’t go on with this trial for 3 weeks.

Below you can read my formal email to Cllr Matt Furniss, Cabinet Member for Transport.

I hope this message clarifies my views to the many constituents who have taken the trouble to write to me about this issue as well as all those interested. I will be updating this page with further developments in due course.

We have spoken about this earlier and I have also discussed this with Mark Brunt,  Leader of Reigate and Banstead Borough Council and County Councillor Zully Grant-Duff who as a cabinet member is of course bound by collective responsibility.  Suffice to say they have no problems with this message to you despite their reluctance to cause political problems for you.

My mailbox has been inundated with correspondence from constituents concerned about the SCC Active Travel project to create a cycle lane in Reigate High Street and reduce the traffic flow to single lane. This correspondence has come from a range of types of correspondents, including, local councillors, local businesses, private individual road users, pedestrians, and cyclists, all of whom have identified major draw-backs in the proposal and many of whom feel that the money could be more effectively spent improving both cycle and road provision in and around the town centre.

I realise that this funding required a quick turn-around to implement measures to improve social distancing and cycle provision, and that there was no time for a public consultation, but this is not a satisfactory reason to impose what is considered by many to be a scheme that will actually worsen the severe traffic issues currently existing on Reigate High Street and the surrounding roads by almost certainly exacerbating the already chronic congestion issues caused by the Reigate one-way system and the long standing issues at Reigate Station level crossing on the A217.

Ever since I have been an MP, and for as long time before, plans have been considered to improve traffic flow in and around Reigate, but none have come to fruition as no easy solutions are available. Both myself and my predecessor raised the issue of the Reigate Relief Road in our maiden speeches in 1997 and 1974 respectively for example! The result of this failure has been increased congestion and pollution on this very busy stretch of road where the A25 and A217 conjoin. These problems have compounded the current issues facing the retail and hospitality sector, and consequently the very future existence of our high street economy.

In view of the capacity issues referred to above, the very last thing that is needed is a lane restriction and reduction in access for delivery vehicles to retail and hospitality outlets on the high street. Whilst welcoming better facilities for cyclists, the truth is that cyclists can (and do) avoid the high street by using other routes, and there are other local areas where the improvement of cycle lane facilities would be much more effective.

I would, therefore, urge you, even at this late stage in a hurried process, to reconsider the proposal and work with the local community and the local council to find a more effective way of spending this money. Other elements of your proposals locally do not cause the sane anxiety, indeed are welcomed.

I still hope you can abort this work as soon as possible and do not leave it three weeks to prove the local community right.

I hope we can work together to find a more bottom-up and co-ordinated solution to an issue so critical to the local economy.

Given the inevitable local interest I am releasing this to the media.