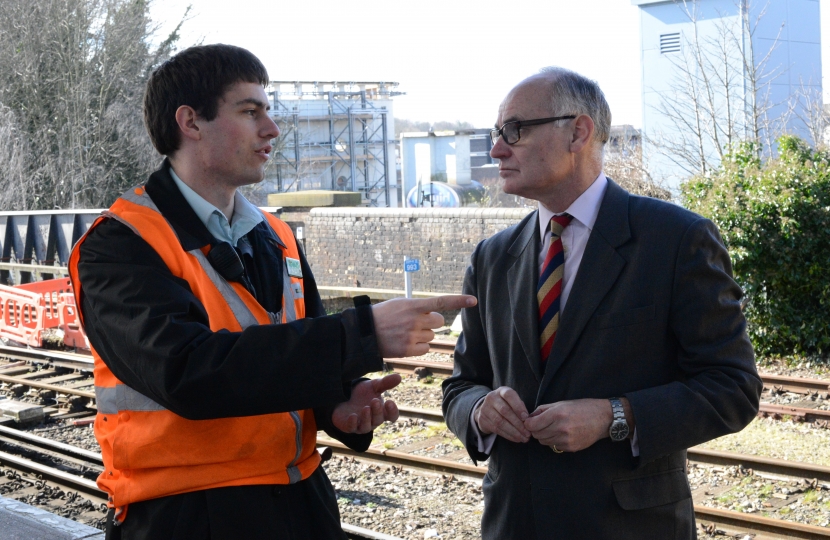 Crispin shared the impatience of rail users who are paying premium prices for their season tickets but who are facing three years of reduced services while works continue at London Bridge. The introduction of Oyster zonal fares would mean a significant reduction on ticket costs. Currently, Southern Railway is only planning to extend Oyster 'pay as you go' singe and return journeys later this year.

Considering the inaction on the part of the train company and the Government so far, Crispin recommended that fed up commuters should take direct action to protest, explaining:

"I propose that we set Monday 1 June as a day for direct, but legal, action; a day when we communicate loud and clear that our patience has run out. I will ask rail users who travel to London to work to volunteer to stay at home on 1st June".

Crispin welcomed the Rail Users Association's petition and announced that he would be seeking support for the 'work from home' action day from those who have signed the petition and to enlist support from commuters' employers to put pressure on Govia and Ministers. He will also be seeking the other parliamentary candidates' support for the idea to make it a cross-party effort.

Crispin concluded: "I hope you will join me in this action so we can convey the strength of feeling, the anger, the frustration and the call for urgent action to deliver a fairer deal for rail users".

Proposal to work from home day on Monday 1st June

Crispin Blunt will write to the employers of anyone who is interested in joining the action to explain that the employee's travel to and from work arrangements have been so disrupted that they wish to protest by not travelling to work on 1st June, but will make arrangements to work from home.

During the election period, Crispin will ask all parliamentary candidates to join the effort by writing to employers of commuters who wish to take part. A cross-party approach will be stronger and ensure that the action will proceed regardless of which candidate is elected on 7 May. The Green Party candidate indicated his support at the AGM.