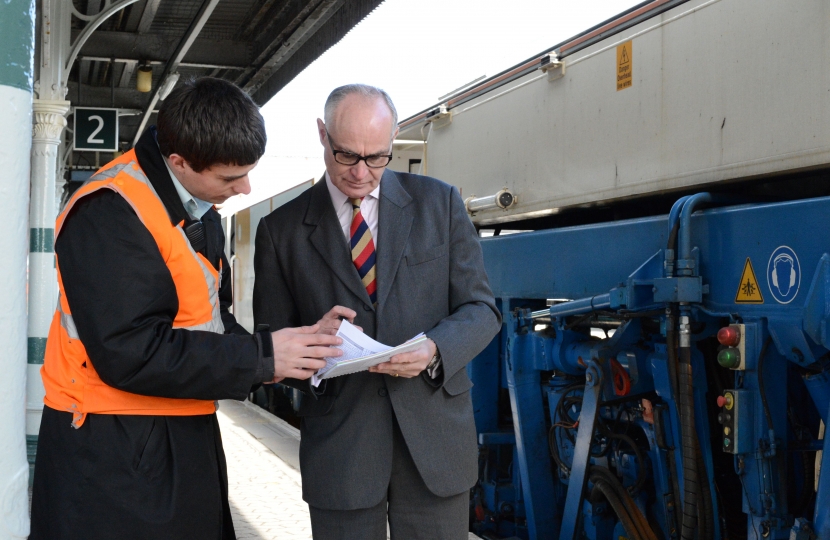 Crispin Blunt repeated his call for a day of protest by rail passengers on 1st June as another ministerial letter sent to him dashes hopes of immediate action on extending Oyster Zone 6 to Redhill, Reigate and other local stations.

Rail Minister, Claire Perry, has confirmed that - whilst Oyster Pay As You Go and contactless fares are on track to be extended to Merstham, Redhill, Earlswood, Salfords, Horley and Gatwick by the end of September - “The Department [for Transport] do not expect to see a change to the Travelcard Zone 6 boundary within any proposals received from the train operator”.

Responding, Crispin Blunt said: “The first thing I will be doing if I get re-elected on 7th May is to go to whoever is the Secretary of State for Transport and Rail Minister and demand again a proper hearing for the case for compensation for commuters using the Brighton Mainline. I understand Ministers are unable to make policy changes during the election period, but it is not good enough to just dismiss the case that we are putting for a fair deal on ticket prices.

“I understand passengers are indignant. We need to get the message across as loud and clear as we can. That is why I am repeating my call for passengers to arrange to work from home on Monday 1st June and to get their employers to support the campaign by writing to the Government and train company.

“I am delighted that Jonathan Essex, the Green Party Candidate, and Anna Tarrant, the Liberal Democrat Candidate, have joined the call for protest and that Ali Aklakul, the Labour Party Candidate, has also indicated his support. We have co-signed a letter which rail users can give to their employers, explaining the work from home day and imploring them to support the campaign for Oyster Zone 6”.

Copy of letter co-signed by Conservative, Green and Liberal Democrat Candidates attached below. The Labour Party Candidate has also indicated his support.

Copy of Claire Perry’s letter to Crispin Blunt attached below.

More information about the campaign here.